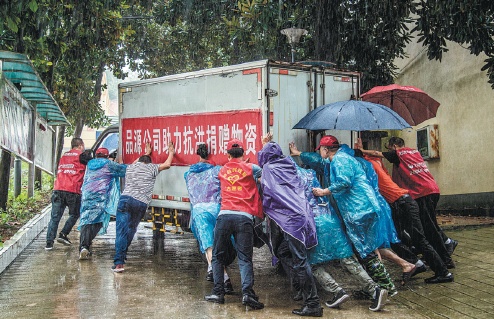 After Hubei province was lashed by heavy rainstorms, ministries have made unremitting rescue and relief efforts.

At least 21 people were killed and four remain missing as torrential downpours hit a township in the province from Wednesday to Thursday, the local government said on Friday.

Liulin township, Suizhou, Hubei was the hardest hit. From 9 pm on Wednesday to 9 am on Thursday, 503 millimeters of precipitation fell within a 12-hour period, setting a record for the township. It led to standing waters averaging depths of 3.5 meters, according to a statement from the county government's website.

The downpours affected more than 8,000 people in the township, damaged or leveled more than 2,700 homes and impacted 11.3 kilometers of roadways and 63 bridges. Power and communications were cut off due to the extreme weather.

According to a statement from the Suizhou city government, affected residents in the town have been settled in a shelter with 26 tents. Food, water and daily commodities have been provided to those affected.

The local government has carried out disinfection efforts in the township to prevent the risk of the spread of COVID-19.

All-out efforts have been made to repair damaged infrastructure including communications and power facilities.

As of Friday afternoon, cellphone signals were resumed in the township while power is expected to return within 48 hours and water supplies in 72 hours.

Liulin is one of the several regions that have been lashed by the extreme weather in the past two days in Hubei.

On Thursday, five cities in Hubei issued red alerts for heavy rains, the top level in a four-tier system.

Ministries have promptly responded to the disaster and offered help.

On Friday, the Ministry of Finance allocated 30 million yuan to Hubei to carry out rescue and relief work.

According to the Ministry of Finance, the money will mainly be used for rescue work and subsidizing disaster-stricken people.

On Thursday, the Ministry of Emergency Management sent a working team to the province to help coordinate rescue and disaster relief work. A total of 173 rescuers have begun rescue operations.

Huang Ming, minister of emergency management, arranged the work via a livestreaming session. Huang asked the rescue team to make all-out efforts to save trapped people.

Also on Thursday, the China National Commission for Disaster Reduction and the Ministry of Emergency Management jointly activated a Level-4 emergency response to floods.

China has a four-tier flood-control emergency response system, with Level-1 being the most severe.

On Thursday, the Ministry of Water Resources warned that many areas across China will see floods this month.

Li Hongyang contributed to this story.