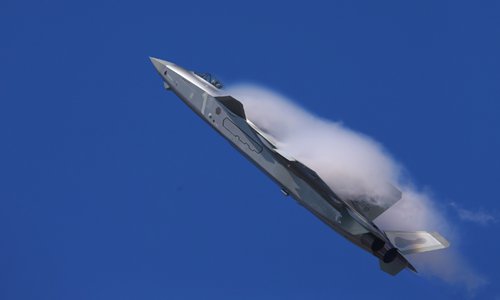 The Chinese Air Force conducted three major missions in February, namely combat readiness patrols around Taiwan, large-scale medical deliveries to Wuhan and flight performances in Singapore, which is an initial indication that the service is on track to become a strategic force this year.

To help control the coronavirus outbreak, the PLA Air Force dispatched three Il-76 large transport planes to Wuhan on January 24, eight Il-76s on February 2, 11 transport aircraft consisting of Y-20s, Il-76s and Y-9s on February 13 and eight more on Monday, which sent thousands of military medical personnel and hundreds of tons of medical supplies to the outbreak epicenter.

The August 1st Air Demonstration Team of the PLA Air Force returned to China on Wednesday after leaving for Singapore on February 5, completing five flight performances at the 2020 Singapore Airshow for the first time, and served as an envoy of peace, culture and friendship, the PLA Daily reported on Thursday.

The intensive month for the Chinese Air Force showed its capability to conduct multiple major missions on multiple fronts at the same time thanks to its strong organizing and mobilizing capability as well as the professional personnel and advanced equipment at its disposal, a military expert who asked not to be named told the Global Times on Thursday.

Reports show that other Air Force troops that were not involved in the three missions were conducting normal training and exercises, which means the Air Force still had a lot of power to spare, the expert said.

According to a roadmap the Chinese Air Force announced in November 2018, the Air Force will become a strategic force this year. It will become modern in 2035 and become world-class by the mid-21st century, the Xinhua News Agency reported.

February gave people a glimpse of what the Air Force has developed into over recent years, the expert said, noting that more advanced aircraft like the J-20 will likely enter service in the rest of 2020.