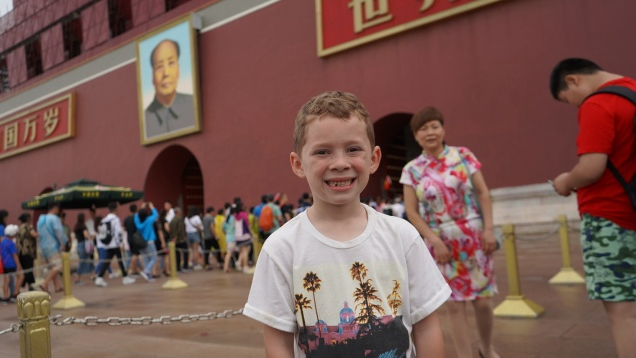 Gavin the meme boy who has taken the Internet by storm with his uncopiable reaction faces, landed in China on Saturday for a surprise visit that was eagerly awaited by Chinese fans who could not wait to create more memes while he tours China.

The seven-year-old internet celebrity’s first stop was the Palace Museum, also known as the Forbidden City, a historical landmark in Beijing. During his visit, Gavin was captured dressing up like a little emperor and posed with an awkward smile.

The seemingly uneasy smile, as a matter of fact, was what made Gavin a star in China.

He first came to people’s attention back in 2014, when his uncle Nick Mastodon, another internet star, posted a video clip featuring Gavin on the short-form video streaming platform Vine.

In the loop video, a crested gecko was placed on top of Gavin’s head, prompting the little boy to force out a nervous smile followed by a discouraged, confused face.

Gavin’s unpretentious reactions soon went viral. “People started to comment about his reaction and how great it was,” Mastodon told US media outlet Select All.

Memes made with Gavin’s funny reactions started to spread around the Internet, and they transcended national boundaries and reached China.

When Chinese netizens discovered Gavin, they fell in love with the boy’s awkward smile which they interpreted as polite but reluctant – a very relatable emotion they may experience in socially awkward situations.

Fans created many memes with Gavin’s Instagram photos and used them in chatting apps and on social media platforms, often when they want to express helplessness, awkwardness or forced positivity in a harsh situation. They even came up with a nickname for him – “the boy with a fake smile.”

Having amassed a huge audience in China, an account was created in Gavin's name on the Chinese social media platform Weibo in July. Over 1.6 million people have followed “the boy with a fake smile.”

His first post, a video which featured the little boy introducing himself, has won over 450,000 likes and was reposted nearly 200,000 times.

“I really want to go to China and meet you, take pictures with you,” Gavin told his fans in the video, which ended with his iconic “fake smile”.

His dream came true one month later. Last Wednesday, Gavin announced through Weibo that he was invited by a Chinese fashion brand to visit China.

“I wanna go to the Forbidden City, and I wanna go to Chengdu to see the pandas!” Gavin said excitedly in a video.

On Saturday, he appeared at the Forbidden City wearing an emperor’s golden robe. Chinese netizens reacted with a warm welcome and didn’t forget to create new memes.

After Beijing, Gavin headed on Sunday to China’s southwestern city of Chengdu in Sichuan Province where he will visit the pandas’ natural habitats in the next few days.