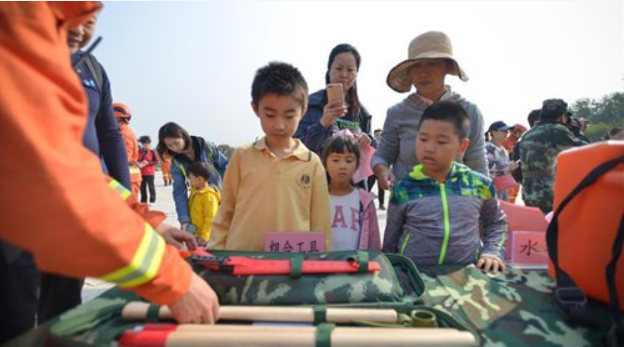 Doctors, firefighters, book-lovers, sports people and travel bloggers - Chinese internet users from all walks of life were taking up the Tetris challenge on Sunday of laying out all their daily work and life necessities across the ground and explaining their uses.

"Tetris challenge" had been viewed more than 61 million times on China's Twitter-like Sina Weibo as of press time with a massive explosion of photos of professionals and their equipment.

Named after the popular 1990s video arcade game, the challenge began in Switzerland on September 1 on Facebook when a Zurich police team pulled everything out their patrol vehicle and posed for a photo that went viral, improving public awareness of the demands and responsibilities placed on state employees such as first aiders, police, medical staff and firefighters.

The original post posted by the Zurich police had attracted more than 4,500 likes and 1,000 shares as of press time.

On Chinese social media, a Beijing surgeon posted photos of scalpels, needles, hammers, scissors and other devices on Weibo, attracting hundreds of comments and discussions about medical treatment.

Net users guessed at the function of devices and exchanged their knowledge about medical treatment.

Firefighters in Central China's Hunan Province posted a 3-minute video of their fire engines and explained all the equipment in detail.

"Firefighters are not just for extinguishing fires," one firefighter says in the video. "We're doing a bunch of things from helping people remove a ring stuck on their finger to rescuing people trapped by landslides and earthquakes."