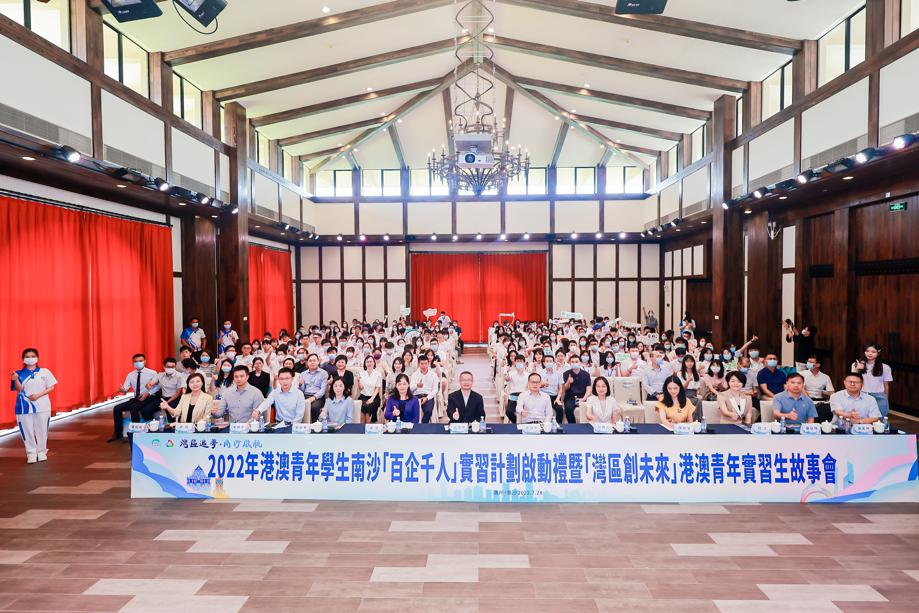 Nearly 1,000 students from Hong Kong and Macao special administrative regions applied for more than 200 job positions during an internship program launched on July 28, 2022, by authorities in Nansha district of Guangzhou, capital of Guangdong province. (Photo provided to China Daily)

An internship program for Hong Kong and Macao students was launched on Thursday in Nansha district of Guangzhou, capital of Guangdong province, with a group of 176 students from the two special administrative regions starting immersive workplace experience in the district for six weeks.

The program will help inject momentum into the implementation of an overall plan to promote comprehensive cooperation among Guangdong, Hong Kong and Macao by further deepening the opening-up of Nansha, according to Ruan Xiaohong, director of the local united front work authority on Thursday.

"Under the overall plan, we have built a working system to promote a full range of services for Hong Kong and Macao youth exchange, internship, employment, entrepreneurship and their livelihoods in Nansha," said Ruan.

In addition to building joint scientific and technological innovation systems for Guangdong, Hong Kong and Macao, the plan, which was issued in June by the State Council, China's Cabinet, also stressed the importance of creating a youth entrepreneurship and employment cooperation platform in Nansha.

Damon Lau, a young man from Macao who started working in Nansha two years ago, gave credit for his job opportunity to policies designed by the local government to attract business start-ups from Hong Kong and Macao.

"I came here because of incentive policies, bigger platforms for entrepreneurship and high-level positioning of the district," said Lau.

In early 2019, as part of plans for the Guangdong-Hong Kong-Macao Greater Bay Area, the Guangzhou government introduced preferential policies covering studies, internships, exchanges, business start-ups and living arrangements to help young people from Hong Kong and Macao move to the mainland city, with an emphasis on starting their careers.

Lau, 28, was then one of the first group of young people from Hong Kong and Macao to sign on as civil servants in 2020 in Nansha, working for the administrative bureau that oversees the development and construction of a local industrial zone.

Lei Ka Pui, a young man from Hong Kong, said he applied for the internship program as soon as he learned that a permanent site for the International Financial Forum had been settled in Nansha.

"I have been paying great attention to the development and dynamics of the financial industry since I was in college," said Lei, who majors in finance at Zhongnan University of Economics and Law.

According to Shan Wen, deputy secretary of the Nansha committee of the Communist Youth League of China, the internship program attracted nearly 1,000 applications from Hong Kong and Macao students for more than 200 job positions.

"The program is highly of interest and favored by Hong Kong and Macao youths," said Shan.