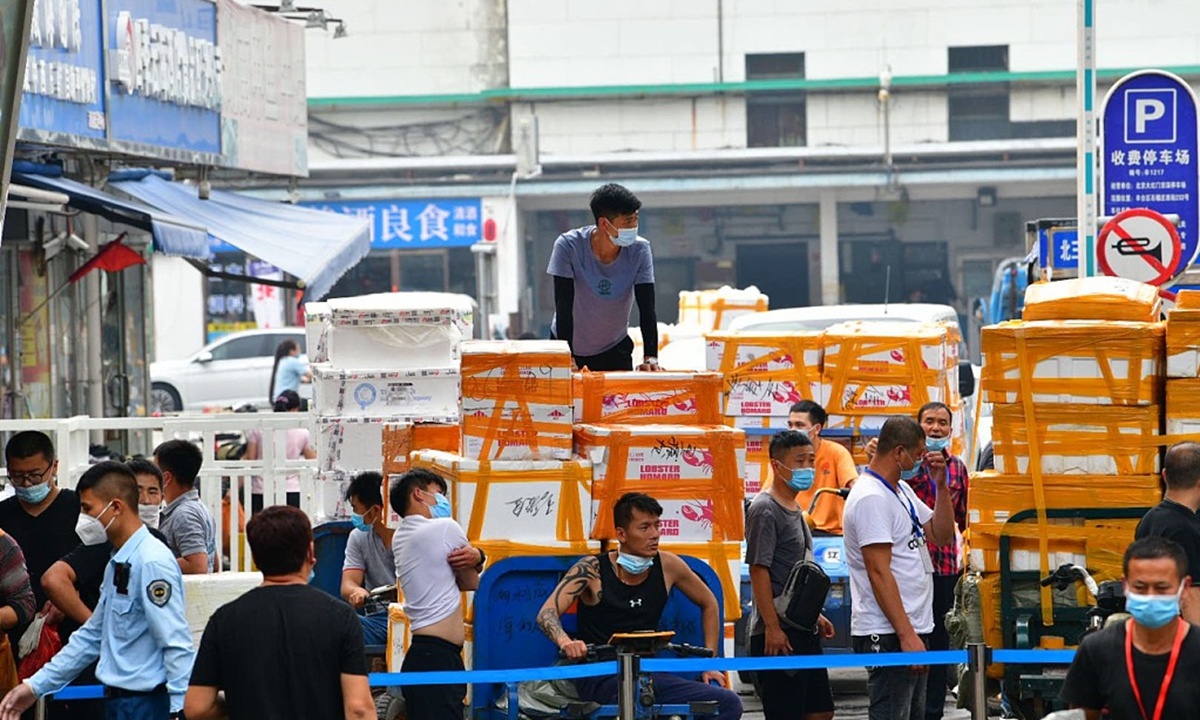 All international freight by air, land and sea resembles cold-chain logistics as winter approaches, which means they could become carriers of COVID-19, a top Chinese epidemiologist warned, while the Global Times found that the largest marine products market in Beijing has strengthened management to prevent infections.

The virus likes low temperature environments, and the lower the temperature, the longer the virus will live, Wu Zunyou, chief epidemiologist at the Chinese Center for Disease Control and Prevention, told the Global Times.

This adds to the increasingly dire pandemic situation around the world, so the risk of infection through contaminated packages overseas increases significantly, Wu said, noting that daily new cases around the world have surpassed 600,000 this month.

Wu's statement came after UPS and FedEx employees at Shanghai Pudong International Airport tested positive for COVID-19, after the airport initiated nucleic acid testing on Sunday for all staff, the local CDC reported on Monday night.

One infected man, surnamed Zhang, 36, is a FedEx courier who works at the airport.

On Monday morning, Shanghai authorities said a 49-year-old employee surnamed Cao from UPS at Shanghai Pudong International Airport tested positive for COVID-19, and his wife also tested positive on Saturday. Both are being isolated and treated at the Shanghai Public Health Clinical Center.

Sun Xiaodong, deputy director of the Shanghai Center for Disease Control and Prevention, said at a press conference on Monday that the confirmed local cases reported on November 9 and 10 had been exposed to one contaminated air cargo container.

These sporadic cases related to imported cargo show that COVID-19 continues to attempt to enter China's borders, and China will face severe challenges domestically in winter, Wu said, noting that he is confident China will pass the winter test.

Facing increasing infection risks brought about by cold-chain deliveries, some Chinese provinces and cities like East China's Shandong Province, Northwest China's Gansu Province, Nanjing in East China's Jiangsu Province and Wuhan in Central China's Hubei Province have announced the building of centralized supervision centers for frozen products to be disinfected, and to conduct COVID-19 nucleic acid tests before allowing them to enter the local market.

Eason Li, China general manager at Norwegian seafood processor Hofseth International AS, told the Global Times on Tuesday that they had raised the safety level during processing procedures to prevent infections, and would try their best to seal the products well to prevent infections during delivery.

Beijing's Jingshen seafood market, the largest marine products distribution center, is no longer open to individual consumers, and strictly manages personnel passing in and out to prevent people from gathering at the market, the Global Times learned from market employees on Tuesday.

Commercial tenants and market employees have to register their health condition on an app of the market every day before being allowed to get in, and they have to take their visit cards with them when entering the market, the Global Times learned.

Some commercial tenants told the Global Times that in the past, they could enter without taking their visit cards. Consumers also said that they were allowed to get into the market about ten days ago.

Jingshen employees said the enhanced management at the market is related to cold-chain deliveries to prevent people from gathering, which could increase the risk of cluster infections, and help to trace the source in case infections happen.

The Jingshen market has suspended its freezer and stopped selling frozen products since the outbreak in the Beijing Xinfadi market in June, according to the employees.

Individual consumers can only shop online. They can collect the products at a designated place at the market gate, or receive the products via courier.

The Global Times found a tenant in the market selling oysters imported from France. The tenant said that the products are fresh and have passed COVID-19 nucleic acid tests.

After coronavirus-positive imported cold-chain products were found across China, Chinese Customs on November 14 said that they had held talks with all 109 countries and regions that export cold-chain food to China, and would suspend imports from companies in these countries suffering from virus infections among its staff.