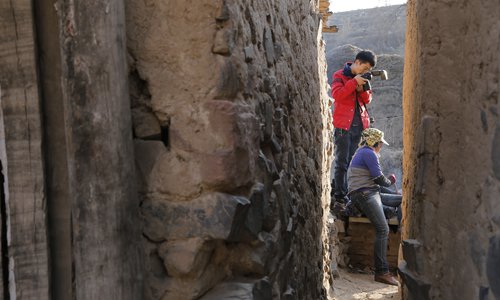 An investigative journalist works in a village in Taiyuan, Shanxi Province. Photo: VCG

As tens of thousands of Chinese parents demand answers over a recent faulty vaccine scandal, many are calling for the return of domestic investigative reporters.

Many have shifted into the cash-rich internet industry. Some have devoted themselves to startups or the philanthropic realm. Only a few persisted in journalism.

The data about the plunge in the number of investigative journalists was termed by netizens as one of "the most shocking and frightening statistics of 2017" on China's Quora equivalent zhihu.com.

Of the country's 1.3 billion people, "there are only a few hundred investigative journalists in the country even using the most loosely defined standard,"  Zhang Zhian wrote in the report.

Zhang surveyed the 175 reporters. Of the 163 who responded, only 19.6 percent of them said they would stick to investigative news coverage after five years, down from 24 percent six years ago. Some 43.6 percent made it clear that they would not be continuing investigative reporting and would move to other ventures in five years.

"Investigative reporting in China is entering its coldest time," Wang Keqin wrote on his Weibo account in 2013.

This doyen of Chinese investigative journalism, who has left the field, came into the limelight again recently because of his front-page piece published in 2010 on how improperly stored vaccines in Shanxi Province led to the death of children.

Wang has witnessed an exodus of investigative journalists in China, either actively or passively, and a dearth of influential investigative reporting over the past few years.

Liu Xiangnan, a senior investigative journalist on the front lines for 18 years, started his career in 2001, the period when media outlets competed to attract advertisers and readers by offering hard-hitting investigative stories.

Many social problems that appeared along with rapid economic development were good soil for in-depth reporting. However, challenged by the rise of new media since 2010, the stagnation of the newspaper publishing industry readership brought about the departure of advertisers.

Economic woes are undoubtedly one of the biggest causes of the exodus of investigative journalists, but they are far from the only one.

People prefer articles that are emotionally appealing over well-researched pieces supported by solid evidence and rich details. This limits the development of high-quality journalism.

The social media blogger Sanbiao lashed out at the shortage of public support and institutional willpower to support in-depth hard news in China. He asked how to "revitalize the in-depth investigative news story when audiences only care about sensational headlines in countless social media accounts."

He said that the public yearns for investigative journalists only when serious scandals are exposed.

"If very few people read news for the facts," he asked, "what makes reporters persist in producing facts?"

The award sparked a heated debate in the industry. Many viewed the award as a benchmark event in the industry for encouraging qualified practitioners and restoring their confidence.

Many applauded for the outlet's effort to retain experienced investigative journalists.

Liu Xiangnan, as a reporter who won the prize of 100,000 yuan, thanked the news site for the incentive.

"The size of the prize itself does not matter. What really matters is that it stirs up the 'dead pool' of in-depth journalism that has long been dormant, showing respect for journalists and the stories they have worked so hard on," Liu wrote on WeChat.

One senior investigative journalist, who did not want to be named, told the Global Times that he began to sense a rise in media regulation starting in 2013. Since then, some veteran journalists have left the industry.

Jian Guangzhou was one of China's most highly regarded reporters. He came to fame for his report that Chinese infants were suspected of falling ill with kidney stones because of the milk powder from leading brand Sanlu.

His reports led to one of China's biggest food security scandals over the past decade.

Because of the report, Jian was lauded as the "conscience of China" in 2008, and the Oriental Morning Post, the news outlet he worked for, became one of the most respected media in China, largely based on its in-depth investigative reports.

However Jian announced his resignation in 2012, which was heartbreaking for many peers.

He said that the decision was painful, but he had to consider his future livelihood.

"China is not short of conscientious journalists, but it is short of the environment in which they can be protected and lead a decent life," one Weibo user commented upon Jian's departure.

At the time, Jian said he hoped that he could set up an NGO to sponsor investigative journalists. However, Jian was unable to do it.

The media reported that around the time of his resignation, the editors in his publication were withholding stories that tracked a corruption case.

"There is a strong sense of frustration if your hard work on an investigation can't be published. It is an inevitable factor that makes a lot of investigative news workers leave," Jian told the Global Times.

In 2013, Yang Qiongwen, while working as a reporter for the Nandao Evening News, was forced by local officials to leave his post after exposing a sexual assault case involving underage girls and their school principal in Hainan Province.

Even in the face of many challenges, investigative reporters can never be completely absent and gone, as far as Liu Xiangnan is concerned. "No matter how difficult the conditions are, there will be room for this profession for sure."

He suggests that there are still many like him persisting in their efforts to hold the wrongdoers accountable.

"But the number might slump, which means that the number of people staying with investigative journalism might be shrinking year by year," he said.

Jian Guangzhou believes that a good way to retain investigative journalists in the future is to promote paid news and to call for public support for professional investigative reporting.

"In this way, independent investigative journalism is no longer restricted and influenced by advertisers, at least," he said.