China's heightened protection of intellectual property rights is part of its efforts to help businesses shore up their competitiveness and boost spending on research and development, rather than a result of pressure from other countries, industry experts and lawyers said. 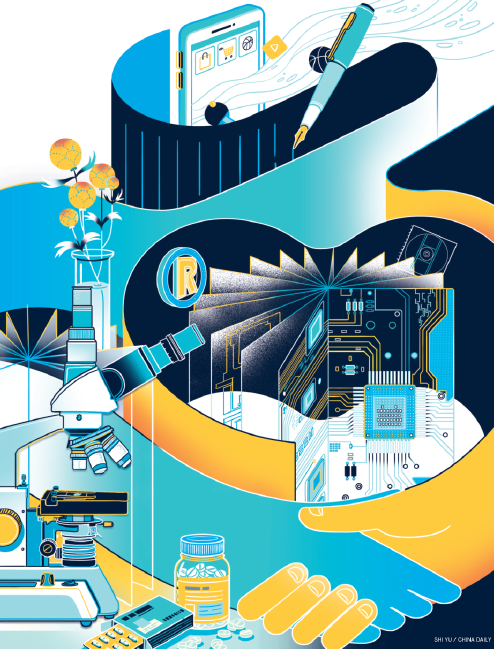 The general offices of the Communist Party of China Central Committee and the State Council published a guideline on IPR protection on Nov 24 that pledged harsher penalties for IPR violations and greater focus on protecting rights in emerging sectors.

Chu Xiang, an associate professor of intellectual rights protection at East China University of Political Science and Law in Shanghai, said the latest guideline exemplifies the country's commitment to developing a business environment that can help businesses boost research and development and improve their competitiveness.

"It will help businesses maintain their cutting edge in global competition," he said. "Only by offering businesses a strong protection mechanism can we give them the incentive to boost investment in research and development and improve their competitiveness."

The guideline highlighted the importance of IPR protection in emerging sectors such as the development of new varieties of plants and chip designs. It also called for efforts to explore the establishment of a system to deal with the relationship between the market approval of a generic drug and the patent status of its branded equivalent, and a drug developer's right to a patent extension based upon regulatory review.

Chu said emerging sectors have seen more IPR disputes than other areas in recent years, and a lack of legislation covering them has made rights protection difficult.

He gave the example of big data protection, where academics have expressed different views on the best way to protect rights owners. Some scholars have said the owners of big data should be entitled to certain rights, while others have said proper aid can be extended to owners through amendments to the Anti-Unfair Competition Law.

"In the meantime, different courts have also handed down different verdicts in similar cases. The tendencies shown by judicial authorities can affect the development of a whole industry," he said, adding that the guideline provides a strong response to such problems.

Gan Shaoning, deputy head of the National Intellectual Property Administration, told a news briefing on Nov 25 that China cannot achieve the transformation of its economic growth model and enable innovation-driven development without adequate protection of IPR.

He said accusations made by some countries about China's IPR protection are groundless, and the Chinese government offers a level playing field for domestic and foreign business in IPR protection.

The guideline called for the introduction of a punitive compensation system for infringements of patents and copyrights to be accelerated. It also said there should be more protection for trade secrets, confidential business information and related source codes.

It set a target of effectively curbing frequent violations of IPR and reducing the difficulties faced by rights holders in defending their rights before 2022. The subsequent goal is to create a business environment with a strong IPR protection capacity and respect for the value of knowledge by 2035.

To boost the level of protection, the guideline urged the authorities to study the feasibility of making a fundamental law on IPR and accelerating efforts to revise laws on patents, trademarks and copyrights.

It urged the authorities to consider measures including the confiscation of illegal gains, destruction of counterfeit products and imposition of bigger administrative fines.

The guideline also stressed the need to unify judicial standards, saying that steps will be adopted to solve difficulties faced by rights holders in providing evidence.

It also called for greater international cooperation in the IPR area, including more sharing of the outcomes of patent examinations and the approval of new varieties of crops. To better protect the legitimate rights of Chinese businesses overseas, an early warning and prevention mechanism for IPR disputes overseas will be established, in addition to a dispute settlement mechanism.

Lin Wei, a partner with Dare& Sure Law Firm in Beijing, said the guideline is part of the country's efforts to adapt to the change in its economic structure rather than a result of pressure from other countries.

He said China's enhanced IPR protection efforts can be seen in a number of areas, including higher compensation ceilings and the patent system being brought more into line with international standards.

China is closing the divide with developed countries in fifth-generation communications technology, big data and artificial intelligence, and it is important for the country to transform its role from simply accepting international rules to becoming a contributor to global rule-making, Lin said.