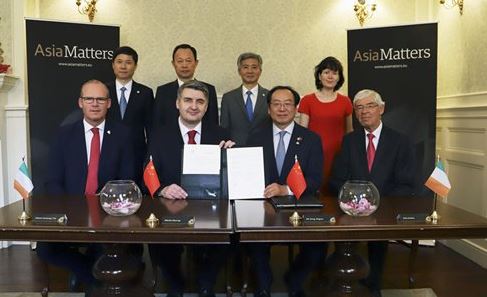 Ireland's deputy prime minister on Friday said Ireland is willing to help China reach out to the European Union (EU) and other parts of the world based on mutual understanding and respect.Simon Coveney, also minister for foreign affairs and trade, made the remarks during a signing ceremony of a memorandum of understanding (MOU) between Dublin-based think tank AsiaMatters and the Chinese People's Association for Friendship with Foreign Countries (CPAFFC) to promote people-to-people exchanges and cooperation between the two countries.Addressing the signing ceremony held in Ireland's second largest city of Cork earlier in the day, Coveney said this MOU is about deepening the relationship between Ireland and China, which is already strong and "getting stronger."China and Ireland can build a friendship that could be very useful for China in the EU as it "allows our trading opportunities to grow and expand," he said.Ireland is a gateway into the European Union and a platform for global and international trade. As China reaches out to the EU and the rest of the world -- through the Belt and Road Initiative in particular -- and becomes more globalized, there are significant opportunities for every side, Coveney said."If the relationships (between Ireland and China) that are being forged today are built on respect, I believe that Ireland can play an important role in terms of being a voice within the European Union to help understand the new China," he said.Ireland is very successful in playing that role and "that is certainly a role that we are trying to play," Coveney said.He also noted that both Ireland and China should strengthen exchanges and mutual understanding to make sure the new relationship between the two countries can work for both sides.Coveney in his speech recalled his three visits to China as an Irish minister, including the one he made during Saint Patrick's Day last year, which he said is "the most important occasion for visitations from Ireland during the year.""So China has been prioritized politically in Ireland," he said.Coveney also expressed satisfaction with the trade relations between the two countries. He said the trade relationship between Ireland and China, seen in areas of agrifood, technology, software development and pharmaceuticals, is now growing rapidly.On Friday, CPAFFC Vice President Song Jingwu and AsiaMatters Executive Director Martin Murray signed the MOU in the presence of Coveney, Chinese Ambassador to Ireland He Xiangdong, and Chairman of AsiaMatters Alan Dukes.The CPAFFC is an organization entrusted by the Chinese government with the responsibility of coordinating and managing the establishment and development of sister cities with foreign countries, said Song.Song said China has so far established 2,700 sister cities or provinces or states with 136 countries including seven sister cities or counties in Ireland, one of which is Cork, Ireland's second largest city, which twinned with China's Shanghai in 2005.