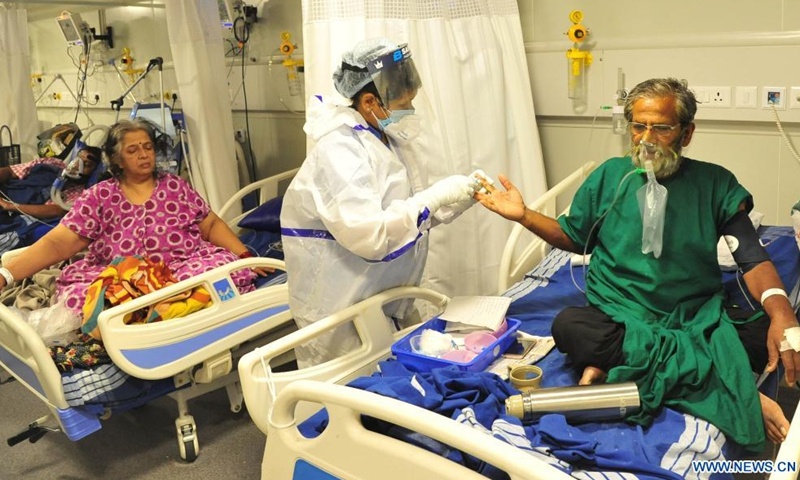 The "double mutant" variant that is wrecking havoc in India is feared to be spilling into neighboring countries and is starting to affect Southeast Asia. Experts warned that without strict border controls and anti-virus measures, countries in South and Southeast Asia would fall into a grave situation, given their weak medical systems and lack of vaccines, and they suggested anti-virus cooperation with China may be helpful.

India has continue to show a COVID-19 surge with the country hitting a new record of 412,262 new cases and 3,980 deaths on Thursday. The country has reported a death toll of more than 230,000 and an infection tally of 21 million, according to the Times of India.

Nepal recorded 8,600 new cases on Wednesday, a fourth day with more than 7,000 daily cases. The Nepalese government has been scrambling to handle a shortage of supplies and overwhelmed hospitals.

In Bangladesh, though the new outbreak since March has shown a downturn after the daily tally peaked at 7,626 on April 7, the country still saw 1,822 new cases on Thursday, with 41 new deaths.

Sri Lanka on Thursday became the latest of India's neighbours to seal its borders. Bangladesh and Nepal have already banned flights and sought to close their borders with India, AFP reported.

Tian also called on the international community to help these countries before things get worse. Given that there are many South Asian migrant workers in Southeast Asia and the virus variants found in India, many countries in Southeast Asia also face great pressure to prevent a new wave of COVID-19.

Chinese living in these countries reached by the Global Times expressed concerns over local epidemic controls.

A man surnamed Lu who works in Myanmar told the Global Times that due to limited testing capabilities, the real epidemic situation in Myanmar may be different from what the authority's statistics showed. Chinese companies are operating in accordance with local governments' prevention requirements - asking workers to wear face masks and keep social distance.

Lu said that seeing the horrific situation in India also frightens them as Myanmar borders India. Lu said once the variant spreads, people in Myanmar would suffer considering the weak medical systems.

Dan Dan, a Chinese who has lived in Thailand for nine years, told the Global Times on Thursday that Thailand had reported an average of 2,000 cases every day and the government has suspended issuing travel documents from India.

"Thailand currently relies on entry controls to prevent being affected by B.1.617 variant first found in India. The country does not have enough resources to resist a round of COVID-19," Dan Dan said, noting that many Chinese living or working in Thailand have returned and some China-invested companies have shut down.

Tian said that prevention is important for Southeast Asian countries and more anti-virus cooperation with China may be helpful, including strengthening information sharing and cooperation on vaccination, vaccine producing and purchasing.

Tian noted that with the cooperation mechanism, China could assist with medical supplies or vaccines.

A batch of 500,000 doses of COVID-19 vaccine sent by the Chinese government arrived in Myanmar on Sunday.

An team of 25 experts sent by the Chinese government arrived in Vientiane, capital city of Laos, on Tuesday.

The Global Times learned from the Health Commission of Southwest China's Yunnan Province that the experts are from the Yunnan health commission and local hospitals, covering fields of public health, infection control, laboratory, respiratory, critical care, and traditional Chinese medicine.