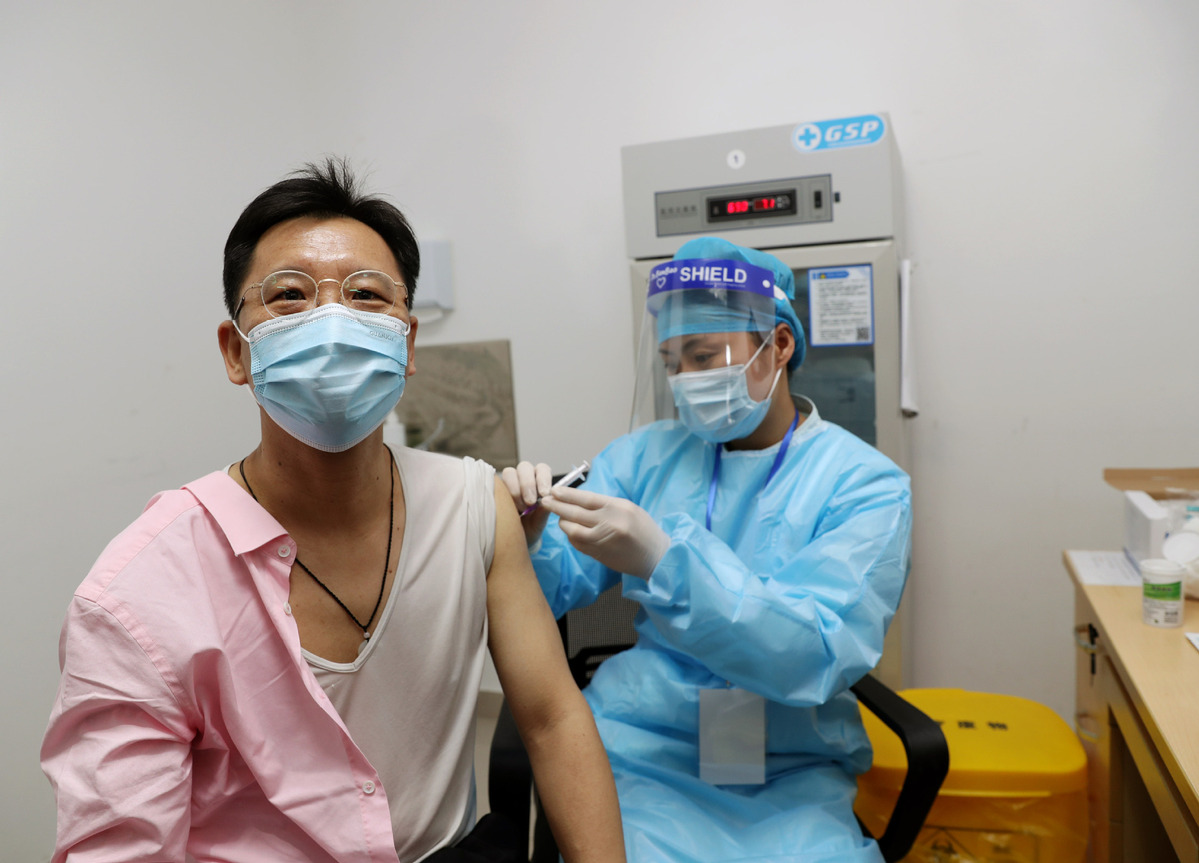 A Taiwan resident receives a dose of COVID-19 vaccine at a community health center in Jiading new city, Shanghai, April 19, 2021.

The Democratic Progressive Party authorities in Taiwan have been urged to remove political obstacles to the importation of COVID-19 vaccines from the Chinese mainland after the island was struck by a severe novel coronavirus outbreak recently.

On Monday, Zhu Fenglian, a spokeswoman for the State Council's Taiwan Affairs Office, expressed the mainland's willingness to provide assistance to Taiwan compatriots in defeating the epidemic after the island's New Party said it was willing to act as a bridge to help introduce the mainland vaccines to Taiwan.

The New Party and other groups in Taiwan recently called on the DPP authorities to allow the importation of vaccines from the mainland to cope with the outbreak.

The DPP authorities rejected the mainland's offer of help and said the gesture from the mainland was aimed at misleading the public to blame the island's authorities.

From Wednesday, all schools and kindergartens were closed to May 28. New social distancing measures have been put in place around the island, including the mandatory wearing of masks and the closure of public gathering places.

Taiwan has been struggling with a shortage of vaccines, with just 1 percent of its 23 million people vaccinated. On Saturday it announced the suspension of applications for vaccination at the applicant's expense, island media reported.

Yang Cheng-wu, head of Taiwan's island county of Jinmen, said on social media that the county had only obtained 800 vaccine doses, which was far from enough and would form an epidemic prevention loophole.

He called on the DPP administration to allow the county to purchase vaccines from the mainland by itself, saying "no political factor is more important than the lives of people".

Expressing the mainland's concern over Taiwan's recent severe epidemic situation, Zhu said she hoped Taiwan compatriots would be able to contain the virus as soon as possible and return to normal life.

"People on the island are our family and we care about their health and safety," she said. "The mainland is ready to do its utmost to help the island overcome the epidemic.

"It's urgent to remove the man-made political barriers put in place by the island authorities so that Taiwan residents can have access to mainland vaccines and their health and interests can be guaranteed."

The DPP authorities have been hyping up the idea of joining the World Health Organization, claiming the island's absence from the organization is a loophole in global anti-epidemic efforts. The island did not receive an invitation to the World Health Assembly this year, which will meet on Monday.

Despite this, there are no barriers to the island obtaining information on the epidemic. Technical communication and a cooperation channel between the island and the WHO are in place, the Taiwan Affairs Office said.

After the COVID-19 epidemic broke out in Wuhan, Hubei province, in late 2019 and early last year, the mainland invited health experts from Taiwan to visit Wuhan to observe it at an early stage, the office said, adding that it has also been updating the island on the latest epidemic prevention and control messages.

Since last year, medical experts from Taiwan have participated in 14 WHO technical events, including the Fourth Global Vaccine and Immunization Research Forum in February, the office said.

"The DPP authorities ignored the health and well-being of the Taiwan people and fabricated all kinds of reasons to reject the importing of mainland vaccines and testing kits, which was completely for its political gains," Zhu said.