CHINA It's back to school for thousands in Beijing

It's back to school for thousands in Beijing 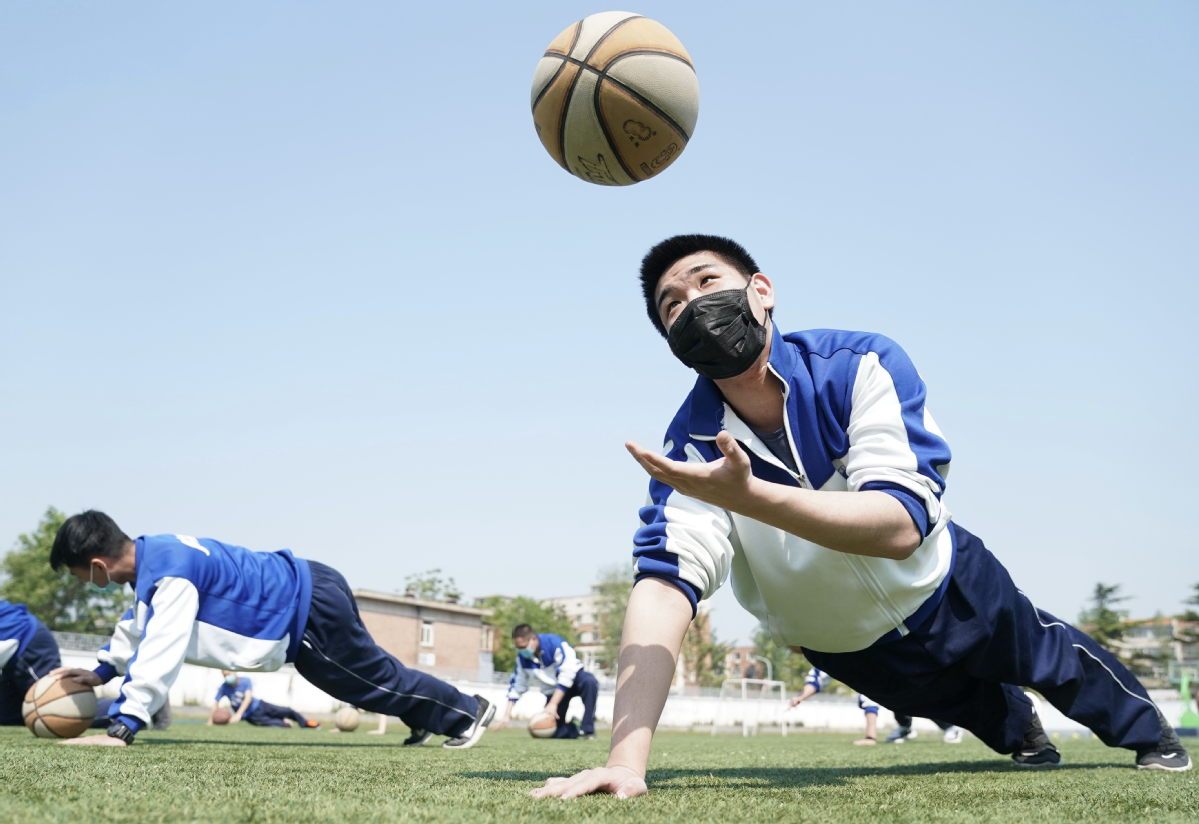 Students practice during a sports class at Beijing Fengtai No 2 High School on Monday, when those in their last year of high school returned to classrooms in Beijing. (Photo: China Daily)

Li Run, a student in his final year of senior high in Beijing, said it felt so good to be back in school on Monday－the day the capital allowed classes to resume for some students for the first time in months.

Li, who attends Beijing Fengtai No 2 High School, arrived at around 8 am, seeing school officials, teachers and security staff standing in front of the school gate.

Together with other students, he lined up－observing 1-meter spacing rules－got his temperature checked and entered the campus.

"Studying alone at home is not very effective for me, and I don't think I have made much progress," Li said, adding, "I have been looking forward to school resuming. I like the atmosphere with my classmates in the school.

"Also, face-to-face teaching is much more productive than online studying for me."

In order to provide a safe studying space for the students, the school has disinfected the whole campus and has stocked 105 liters of disinfectant, 100 gloves and 5,540 masks as part of epidemic control and prevention measures.

"The overall 248 students were divided into 10 classes, and each class occupies the space of one floor with two classrooms and four bathrooms in order to reduce infection risks," said He Shiming, principal of the school.

According to the school, anyone whose temperature is higher than 37.3 C will trigger the emergency plan, which means they will be immediately sent to the hospital. No one triggered the plan on Monday.

Liu Hailian, psychology teacher at Fengtai No 2 High School, said she has been providing consulting services via telephone and internet over the past two months as the outbreak swept the country.

"Some students lack self-control and could not study regularly at home, which has caused psychological problems and conflicts with their parents," she said. "A few students worry about health issues, and we give them some suggestions."

She suggested that no matter how the students spent their extra-long winter vacation and home-studying period, they should see this school opening as a totally new start and work hard to achieve their goals.

According to the capital's education authority, almost 50,000 students in their final year of senior high school returned to class on Monday, while around 1,200 students failed to return because of isolation or other reasons.

These students will participate in the college entrance examination, which is scheduled to be held from July 7 to 10 in Beijing.

Those in their final year at junior high school in Beijing are scheduled to return to school on May 11.

Several cities in China have welcomed students back to school. Students in the final year of senior and junior high schools in Shanghai, as well as in Guangdong province's Guangzhou and Shenzhen, resumed classes on campus on Monday, according to their governments.

Schools mandated that students and teachers must have their temperatures checked and hands sanitized upon arrival. Each person must also wear a mask throughout the day, except during mealtimes.