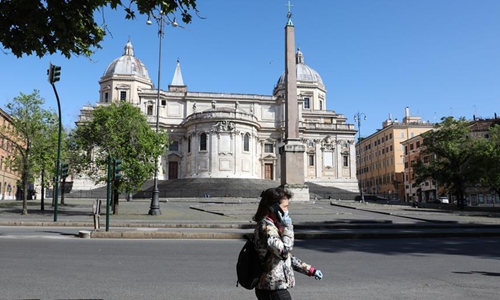 A woman wearing a face mask and gloves walks along a street in Rome, Italy, on April 27, 2020. (Photo: Xinhua)

Following other European countries such as Germany and Spain, Italy, used to be epicenter of the COVID-19 pandemic in Europe, started Monday to ease its national lockdown and reopen its economy as the daily deaths continue to drop. The situation has improved since March, enabling developments which Chinese experts said were feasible and signals that European countries appear to be regaining control of the pandemic.

Italy began to lift the two-month national lockdown and resume production and work in stages under the premise of strict compliance with the regulations on epidemic prevention and control, media reported on Monday.

Italian authorities reported 174 deaths linked to COVID-19 on Sunday, the lowest level since the start of the lockdown on March 10, bring the country's total to 28,884. A further 1,389 cases were confirmed on Sunday while new 1,740 recoveries were reported in the country. Data shows the daily new cases generally continued to drop during the last month.

Experts reached by the Global Times on Monday said the data showed that Italy appears to have passed its outbreak peak and it’s reasonable to start work resumption as long as the country has developed a complete strategy.

Yang Zhanqiu, a Wuhan-based virologist, told the Global Times that given Italy has learned Chinese experience to fight against the epidemic and has flattened the curve, easing lockdown can help the country to strike a delicate balance between "maximum protection of public health" and "minimum impact on the economy."

Yang noted Italy should continue to strictly keep social distancing, track and treat COVID-19 cases and their close contacts in a timely manner, and maintain the China-style makeshift hospitals to ensure all the infected patients can be quarantined and treated.

While Europe is trying to ease out of lockdown without causing a second wave outbreak, Chinese public remain cautious and concerned over the epidemic in Europe and warned the European countries to maintain high alert while resuming work.

According to a report on Wednesday by the UK’s media outlet Daily Mail, before the Italian move, Germany was among the first to relax restrictions but infections and deaths have since trended upwards; Spain has also outlined its four-stage exit strategy despite a recent rise in both cases and deaths; France's Prime Minister warned country is 'on a knife-edge' between saving lives and the economy.

The New York Times reported on April 26 that Italian Prime Minister Giuseppe Conte detailed how the country would begin to ease Europe’s longest lockdown. From Monday the manufacturing and construction sectors would be allowed to operate as long as workers observed social distancing and wore masks, said the report.

Parks may also reopen on Monday, and outdoor exercise, such as jogging, could be carried out more than 200 meters from home, the report said. While gatherings and parties remain banned, and travel remains closely regulated, the visiting of relatives will be allowed to people within Italy, the report said.

A resident in Venice, who gave his name Sebastiano, expressed his concerns after the lockdown eased. “I hope people will follow orders now that they are such, because hospitals are already almost out of room and doctors are forced to choose to cure some and not cure others, and that is awful to imagine. If we do not respect orders like Chinese people did, the situation will become unbearable,” Sebastiano told the Global Times on Monday.
However, “the problem is that unlike people in China are used to respect orders and directives, here[in Italy] a bunch of people thought the suggestions to avoid contact were ‘too strict’ and I’m worried that they could go anyway to the disco or to the mall as the country begins to lift the lockdown,” he added.