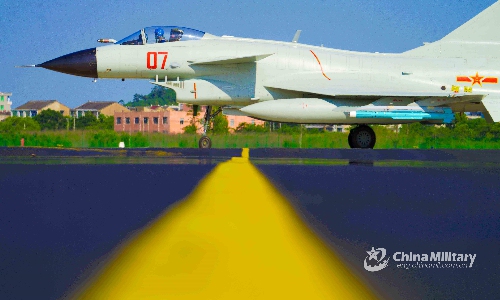 A J-10 fighter jet attached to a naval aviation brigade under the PLA Eastern Theater Command taxies on the flightline prior to a round-the-clock flight training exercise on May 20, 2020. (eng.chinamil.com.cn/Photo by Tian Jianmin and Liu Guoyang)

The naval version of J-10 used in the exercises was also found to be upgraded with advanced avionics systems and China's most advanced close-range combat missiles, reports said.
A naval aviation brigade attached to the PLA Eastern Theater Command recently held aerial free combat exercises with different types of fighter jets, instead of using only one type of fighter jet like in the past, China Central Television (CCTV) reported on Monday.
In a session at dusk, a J-10 and a Su-30 took off from an airfield in East China's Zhejiang Province, and engaged a "hostile" fighter jet group consisting of two J-10s in a mock dogfight, CCTV reported, noting that the training made the best out of each type of fighter jet and maximized the efficiency of combat groups.
With different fighter jets in a same group, pilots must understand the weapon and radar capabilities of their teammates' aircraft in addition to their own.
The J-10 is good at mid-range combat and the grasp of the battlefield situation, while the Su-30 has an upper hand in short-range combat. The combination of the two can bring combat capabilities to a next level, analysts said.
This type of mixed mock combat can also be used to better simulate potentially hostile aircraft, Fu Qianshao, a Chinese military aviation expert, told the Global Times on Tuesday.
The J-10 is similar to the likes of the US-made F-16 and F/A-18 and France-made Rafale in terms of aerodynamics and mobility, while the Su-30 can play the heavy fighter role like that of the US F-15, Fu said.
With this kind of mock battles, the pilots could figure out many tactics that could be used by the enemies, Fu said, noting that other types of warplanes, including early warning aircraft and electronic warfare aircraft, could also join mock battles.
Chinese military observers also noted that the J-10 featured in the exercises, the J-10AH, is an upgraded version.
According to the CCTV report, the J-10AH added navigation antenna similar to that of the J-10B/C, switched antenna for Identification Friend or Foe transponder, and upgraded the VHF/UHF antenna, Shanghai-based news website eastday.com reported on Monday.
The J-10AH has also become capable of carrying China's most advanced close-range aerial combat missile, the PL-10, which can attack any target the pilot can see within range regardless of the positioning of the aircraft, eastday.com quoted experts as saying.
With electronic warfare and stealth to be widely used in the future, it is uncertain if radar can still effectively guide long and mid-range missiles in an attack, and it could still be up to close range combat to decide a battle, and that is where the PL-10 shines, the report said.