China and Russia launched a large-scale strategic military exercise in Northwest China on Monday, the first joint drill with another country hosted by China since the COVID-19 outbreak, with the Chinese People's Liberation Army (PLA) dispatching advanced weapons and equipment, including J-20 stealth fighter jets and Y-20 large transport planes, which were the highlight of the opening ceremony. 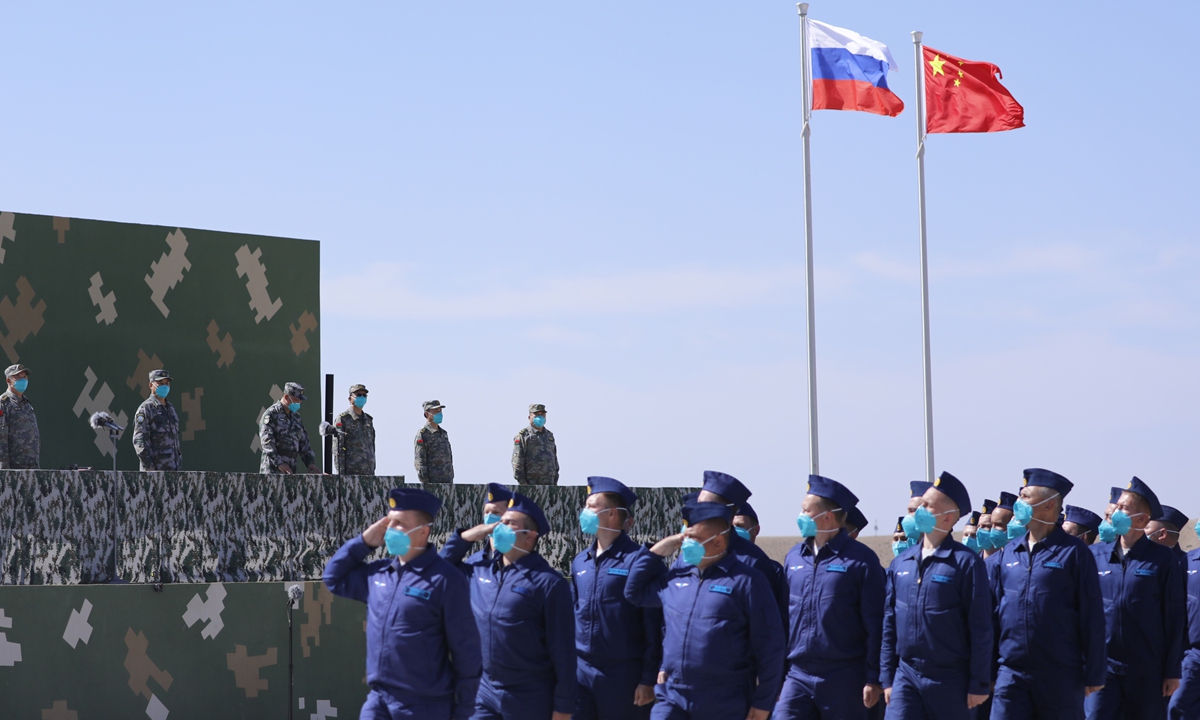 This is the first time the PLA has sent the J-20 in joint drills with another country, and this, along with other exercise arrangements like sharing PLA main battle equipment with the Russian troops, displayed a high-level of cooperation and mutual trust between the Chinese and Russian militaries at a time when the two countries are facing challenges from the changing security situation in Central Asia following the US' troop withdrawal from Afghanistan and direct threats from the US and its allies, Chinese experts said.

Kicking off the opening ceremony, 15 attack and transport helicopters flew past the site, followed by nine ground phalanxes from the PLA Western Theater Command and three phalanxes from the Russian Eastern Military District which received inspection.

Wrapping up the ceremony, General Li Zuocheng, director-in-chief of the exercise, also a member of the Central Military Commission (CMC) and chief of staff of the Joint Staff of the CMC, announced the start of the drills, CCTV reported.

The exercise set the theme of jointly safeguarding regional peace and stability, and is scheduled to conclude on Friday. 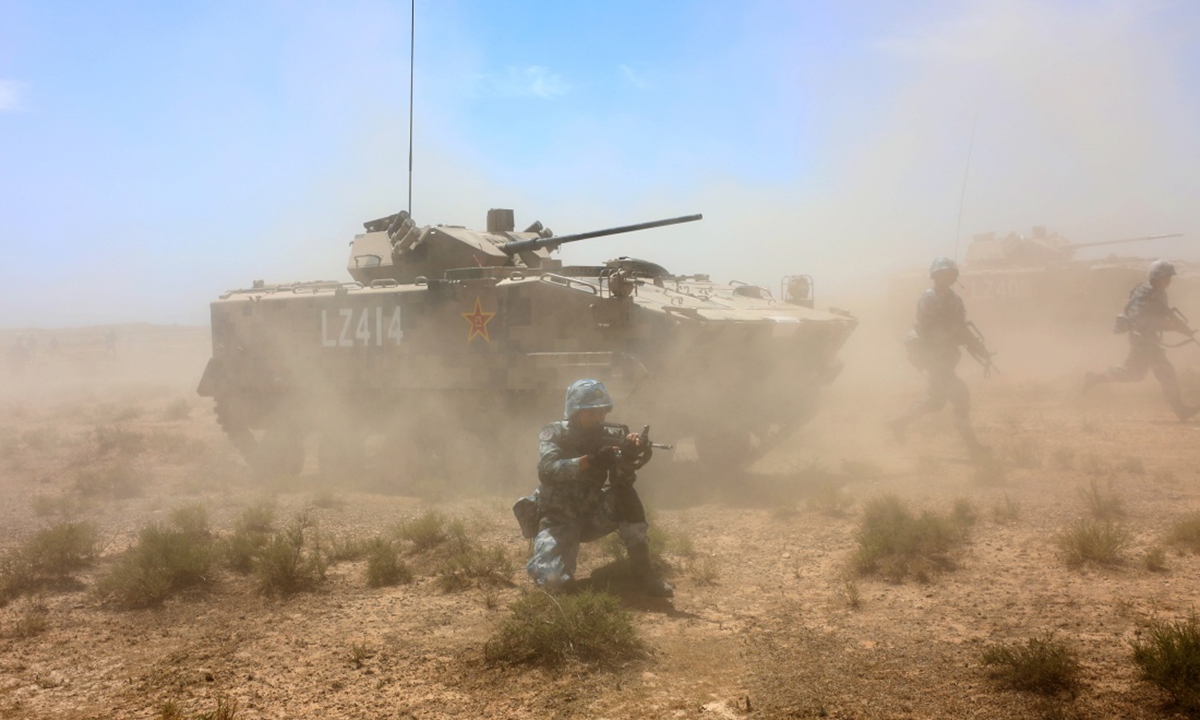 Military personnel conduct adaptive training for a joint military drill on Aug. 3, 2021. A joint military exercise by the Chinese and Russian armies will be held from Aug. 9 to 13 at a training base of the People's Liberation Army (PLA) in northwest China's Ningxia Hui Autonomous Region.Photo:China Military

While having made public appearances in Airshow China and military parades, the J-20 stealth fighter jet had never participated in a joint exercise with another country until the Zapad/Interaction-2021 with Russia, observers said.

The appearance of the J-20 in the drills shows that the military cooperation, exchange and mutual trust between China and Russia have reached a very high level, since the J-20 is one of China's most advanced hardware, Song Zhongping, a Chinese military expert and TV commentator, told the Global Times on Monday.

Another exercise arrangement to display the two militaries' mutual trust and high level of cooperation is that the PLA will share some of its main battle weapons and equipment with the Russian troops.

According to press releases from both Chinese and Russian sides, Russian personnel have been provided with the PLA's Type 11 wheeled assault guns and Type 08 infantry fighting vehicles in adaptive training over the past week.

This will allow both sides to better understand each other's way of combat and form better tacit understandings in future joint military operations and counter-terrorist missions, Wei Dongxu, a Beijing-based military expert, told the Global Times.

Observers also pointed out that the Zapad/Interaction-2021 is the first joint drill with another country hosted by China since the COVID-19 outbreak in 2020.

In another close military interaction with Russia, from August 22 to September 4, the PLA will host certain events of the International Army Games 2021 organized by the Russian Defense Ministry, and send contingents to other events in Russia, Belarus, Uzbekistan and Iran, the Chinese Defense Ministry announced in late July. 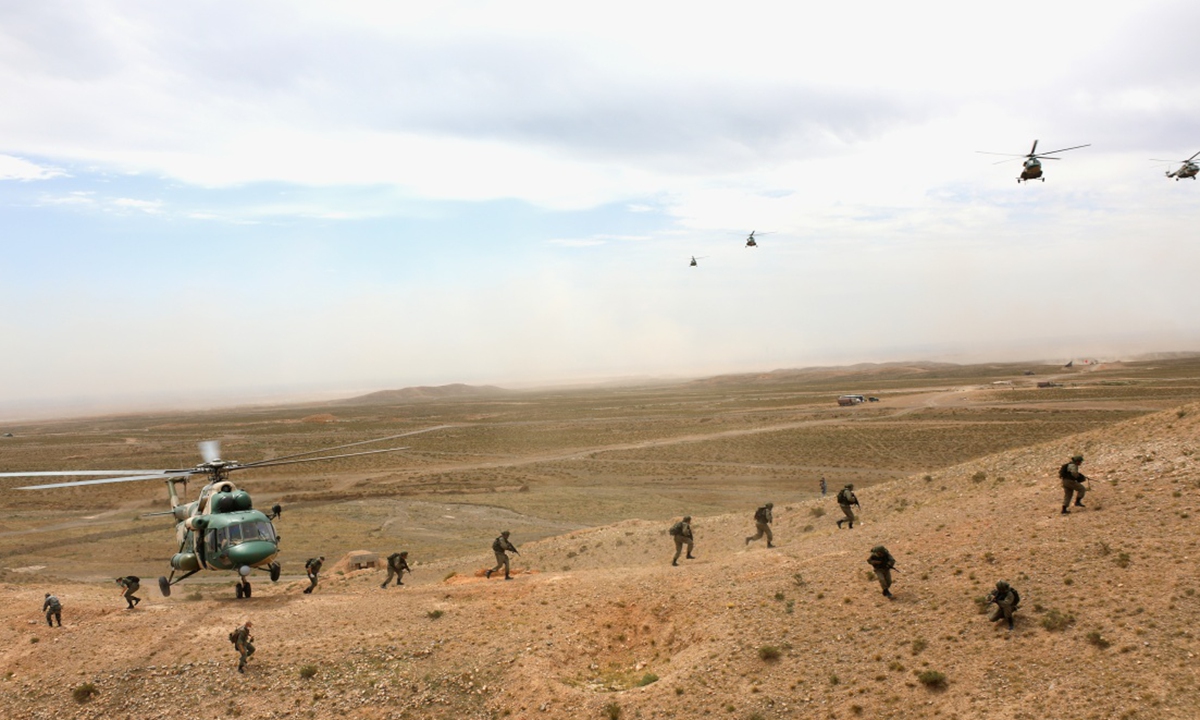 Military personnel conduct adaptive training for a joint military drill on Aug. 3, 2021. A joint military exercise by the Chinese and Russian armies will be held from Aug. 9 to 13 at a training base of the People's Liberation Army (PLA) in northwest China's Ningxia Hui Autonomous Region.Photo:China Military

After the opening ceremony, the two sides will conduct action intensive exercises.

The exercises will reflect new concepts and new tactics, including saturation fire assault, airborne landing and seizure of in-depth hostile regions, and drone swarm assault, Major General Han Lin, director of the strategic and campaign-level training bureau at the Joint Staff of the CMC, was quoted by CCTV as saying on Monday.

One of the major forces to participate in the drills is the armored assault group, which consists of a wide selection of armored vehicles with high mobility and strong firepower.

Hundreds of vehicles from several dozen types will join the exercises, which will feature a variety of combat elements and aim at honing the troops' joint combat capability, Colonel Cheng Liang, deputy commander at a combined arms brigade affiliated with the PLA 77th Group Army, told CCTV.

Hundreds of munitions will be fired in one minute in a single drill area, Cheng said.

Thousands of artillery shells will be launched in the exercises, the report said.

The Y-20 and other types of transport aircraft will send airborne troops from higher in the sky at a larger scale, while also airdropping heavy equipment, including Type 03 airborne infantry fighting vehicles.

Russia's Su-30 fighter jets arrived at the training base in late July and are expected to join the exercises together with the Chinese warplanes that were featured in the opening ceremony.

For air defense, the PLA will deploy the HQ-17, one of the PLA's most powerful brigade-level field air defense missile systems together with the Type 95 4-barrel 25-mm-caliber anti-aircraft artillery and surface-to-air missile system, CCTV reported.

Song said that these exercise subjects have practical meaning in combating terrorism, extremism and separatism, under the context that the security situation in Afghanistan is becoming more complicated and could spill over to neighboring countries, including China and Russia.

A Chinese expert on international affairs who requested anonymity told the Global Times that the US' irresponsible troop withdrawal from Afghanistan has left a burden for neighboring countries in Central Asia. As major powers, China and Russia need to play their roles, jointly safeguard regional peace and stability, and prevent the development of terrorist forces in the region.

The Qingtongxia Combined Arms Tactical Training Base, where the exercise is being held, is located southeast of Helan Mountain, the geographical division of Northwest China. It has an altitude of about 2,000 meters, and is suitable for carrying out complicated military exercises for many different military branches, Shanghai-based Xinmin Evening News reported on Monday.

It hosted several major PLA exercises, including the "Crossover" and "Firepower" series exercises, the report said, noting that with complex terrains and well-rounded facilities, the Qingtongxia base will give the Chinese and Russian troops a realistic scenario test and hone their skills.

From a global point of view, both China and Russia are facing suppression from the US, which led to the two countries' enhancement in military cooperation through joint exercises, experts said.