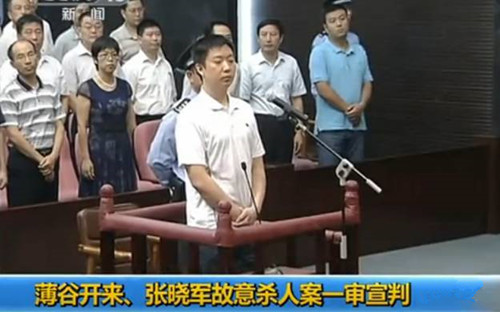 An accessory in the Bogu Kailai case has had his 9-year sentence commuted three times since August 2012, the China Judgment Online said.

Born in 1979 in Gu county, Shanxi province, Zhang was an officer in the Chongqing Municipal government as well as an aide of Bo Xilai (Bogu Kailai’s husband). On November 13 2011, Bogu poisoned and killed Neil Heywood along with Zhang. In August 2012, the Hefei Intermediate People’s Court sentenced Zhang to nine years in jail. Zhang was judged an accessory to the crime.

Zhang had his sentence commuted in August 2014, November 2015 and August 2017 for confessing to the crime, promising to observe the laws, regulations and prison rules and willing to accept reform through education.

The court said that Zhang was truly repentant and fulfilled the Provisions of the Supreme People's Court on the “Specific Application of Law in Handling Commutation and Parole Cases.”