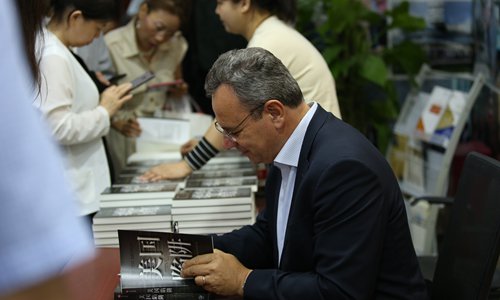 Frédéric Pierucci signs a copy of his book at a promotional event in Beijing on Thursday. (Photo: Courtesy of CITIC Press Group)

Frédéric Pierucci, a modern version of Edmond Dantès from The Count of Monte Cristo, came to Beijing on Thursday to promote the Chinese version of his Le Piège Américain or The American Trap, a warning to Chinese companies to be careful of the US' underground economic warfare tactics.

"Chinese companies should build a compliance risk management system soon to protect themselves from the US' Foreign Corrupt Practices Act (FCPA), the first law banning bribery of foreign officials around the world," Pierucci, a former executive at French energy and transport giant Alstom who served jail time in the US after being accused of financial misconduct, said at the event.

April 14, 2013 was a dark day for Pierucci as he was arrested by the FBI as he stepped off the plane onto US soil. Without any explanation, he was whisked away to the FBI building in Manhattan, and started his long prison nightmare.

"Suddenly, I became a monster, a monster in a trap. I put on an orange coverall, my body, my hands and feet were locked by chains, and I could barely walk or breathe," Pierucci wrote in his book of his experience in jail.

He was told that he was being charged with authorizing bribes to Indonesian officials to secure a contract. Pierucci maintains he just signed the contact but did not arrange the kickbacks himself.

This was the beginning of his five-year-long legal struggle with the US Department of Justice. Eventually he pleaded guilty and served time in prison. He finished his sentence in September, 2018.

"Did you keep thinking about how to get revenge like Edmond Dantès did every day during your long stay in jail?" a Chinese reader asked Pierucci at the event.

He smiled and said that he was not like Dantès, who thought about becoming rich and marrying a wonderful woman.

"I just want to find a strategy to help French companies and companies from other countries have fair competition with companies in US," he said, noting that the US is weaponizing the law by using it to target and damage non-US companies.

"The story of the FCPA is an underground economic war," Pierucci said.

According to Pierucci, the US government shifted their attention to economic concerns after the disintegration of the Soviet Union. According to Pierucci, the government approved the FCPA in 1977, but it didn't start playing a larger role until the 2000s when the US began to successfully use the pretext of anti-corruption to disintegrate many large multinational companies in Europe, especially French multinationals.

The US Department of Justice prosecuted the executives of these multinational companies and even sent them to jail. They offered them reduced sentences in exchange for guilty pleas that they could then use to force the companies they worked for to pay huge fines to US.

Since 2008, 26 companies have had to pay fines exceeding $100 million in the US. Fourteen of them are European companies (five are French companies) while only five are US companies.

Due to the FCPA, Alstom paid $770 million, the largest fine imposed by the department. It was during this time that the US' General Electric took the opportunity to acquire Alstom.

"As one of a number of victims, I am not going to be silent. I don't want to be one of those who cannot recover from prison life, get lost in the sudden start of a new life, or try to forget the past. I choose to fight with my full strength because this is a real war," Pierucci wrote in his book.

He emphasized the importance of building a compliance risk management system within companies.

"I know some leaders of companies especially some small companies do not want to spend a lot of money in this field, thinking this will not happen to them. However, once you start your overseas business and trade by US dollars or send English emails, you might be at risk of being tracked and becoming the target of the US. The US department will send some business spies to induce employees to become an informant and reveal some trade secrets by paying them a lot of money," he said.

"Training employees are very important. We need to tell them about the risks that they and their companies might face, and let them realize the damage they will cause if they 'betray' the company," Pierucci told the Global Times.

He said Alstom is an example to other companies including Chinese companies, and now is the time to work together to fight this war.

"I felt very nervous and stressed when I read the first half of the book... I think Chinese companies truly need to think about this problem," Zheng Chuanguo, an employee at an overseas management and acquisitions assessment company, told the Global Times at the event.