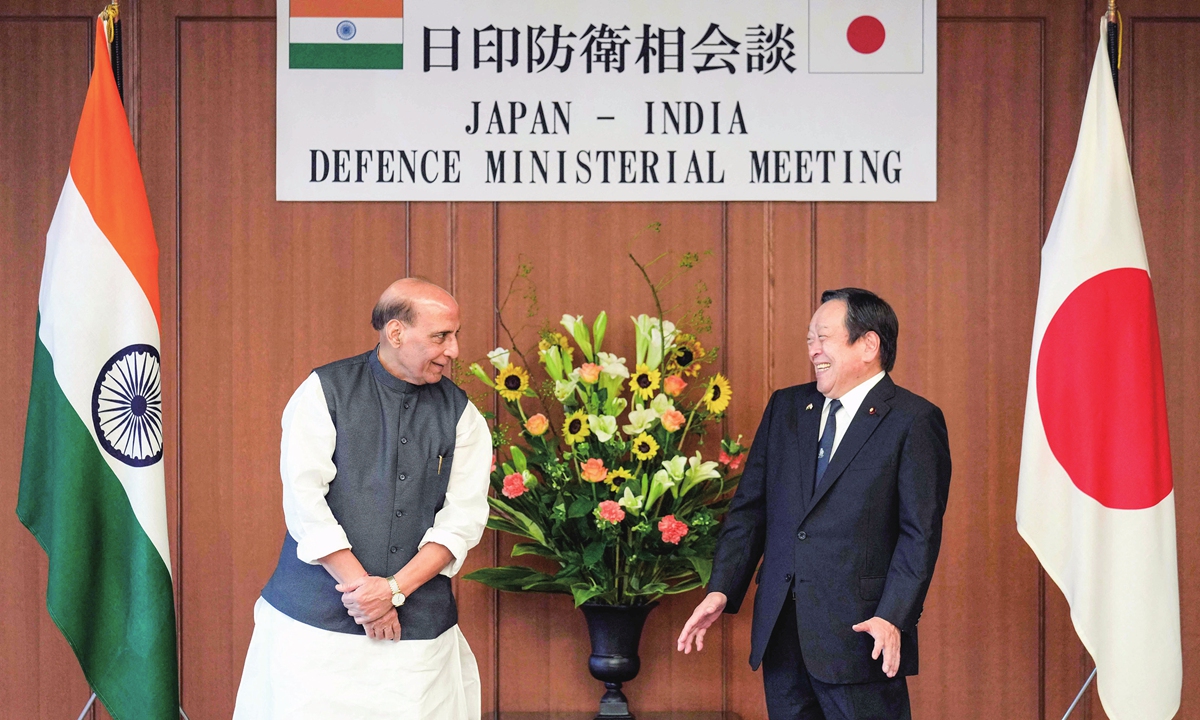 Japan's and India's foreign and defense ministers held the second Japan-India "2+2" Ministerial Meeting in Tokyo on Thursday. While further military and security cooperation is emphasized, experts said Japan's attempts to further draw India closer to the US-led camp are not likely to succeed.

According to the joint statement released on Thursday night, the ministers highlighted again their commitment to a common strategic goal toward a "free and open Indo-Pacific."

During the meeting, Japan expressed its resolve to "examine all options necessary for national defense," including so-called "counterstrike capabilities," and its determination to fundamentally reinforce its defense capabilities within the next five years, to which India expressed support.

The two sides agreed to hold military drills aimed at boosting coordination between their air forces, according to Indian media outlet PTI.

Although Japan and India have not mentioned China or issues involving China in their public statements, their further military cooperation is clearly aimed at China, Qian Feng, director of the research department at the National Strategy Institute at Tsinghua University, told the Global Times on Thursday.

Japan and India are key countries in the Asia-Pacific region, and the rapid development of their relations in recent years has been driven by the US-led Quadrilateral Security Dialogue, he said. "At the heart of this mechanism is the US push and its spin on the China threat."

It's no surprise that Japan and India have boosted ties by meeting and reaching further military cooperation, but it remains unclear as to how much the two sides can agree on the camp issue and how much of what is agreed upon can be achieved, experts noted.

For Japan, its efforts to promote a "free and open Indo-Pacific" and enhance its diplomatic and security influence, as well as to demonstrate its "Asian leadership," are highly reliant on India's support, Sun Wenzhu, an associate research fellow at the Department for Asia-Pacific Studies, China Institute for International Studies, told the Global Times in an earlier interview.

But India's strategic autonomy would set a ceiling for Japan-India cooperation, Sun said. "India will likely not be as dedicated to serving the US in maintaining the hegemonic order as Japan is. Instead, it will seek to maximize its own interests."

Japan has many arguments - It will emphasize India's deputes with China and Russia to draw India closer to the US, Da Zhigang, director of the Institute of Northeast Asian Studies at Heilongjiang Provincial Academy of Social Sciences, told the Global Times on Thursday. "But India can't be completely swayed by it. It's not in India's interest."

India's series of moves is evidence that it prefers to maintain a balance, Qian noted.

"Previously, the US has put a lot of pressure on India to make a clear statement and choose sides on the Ukraine issue. Even under intense pressure from the US, India has not changed its position."

India's non-aligned purpose since its founding was also emphasized by experts, which means that Japan's efforts to further draw India into the US-led camp will hardly succeed.

During the meeting, the ministers noted the progress made since the last 2+2 ministerial meeting, and highlighted bilateral security and defense cooperation, which is said to "constitute an important pillar of the India-Japan Special Strategic and Global Partnership," according to Thursday's joint statement. However, observers noted that Japan-India relations are also facing potential crisis.

India hopes not to join a certain camp, which is clearly different from Japan's foreign policy of pleasing the West, and India's previous moves have already sparked resentment in the West, Da said.

The second Japan-India ministerial meeting on Thursday was previously planned for April 2021 at the earliest. It was delayed by 17 months and was scheduled right after India's participation in the Vostok-2022 joint military exercises organized by Russia, which reflects Japan's unease, observers noted.