Japanese classical music lovers have a deep appreciation for the works of Chinese composers, giving a standing ovation to the New Japan Philharmonic orchestra at a recent concert. Playing under the baton of Xia Xiaotang, principal conductor of China Philharmonic, the New Japan Philharmonic delivered a special performance in Japan, marking the 70th anniversary of the founding of the People's Republic of China titled, China Day. 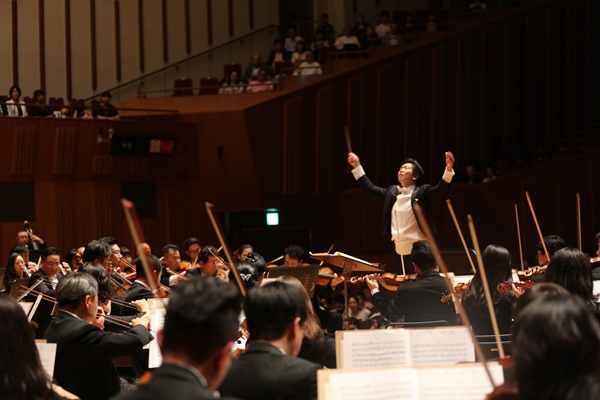 More than 1,300 audience members filled the Tokyo Opera City Concert Hall on Oct 22 to hear the special program that opened with Ode to the Red Flag, written by Chinese composer Lyu Qiming in 1965 and premiered in Shanghai the same year.

"When we prepared the repertories, we wanted to portray China through music," says Xia, who worked with the New Japan Philharmonic for the first time. "The program, featuring pieces written by Chinese composers of different generations, combines Western symphonic music with Chinese ethnic folk music."

The New Japan Philharmonic was founded in 1972 by conductor Seiji Ozawa.

"It was also a risky idea, because usually when we perform abroad, it is Western composers' works that receive warm feedback from the audience."

The obvious appreciation for the music and the long ovation surprised Xia. "It proves music's unique ability to transcend national borders."

During the first half of the concert, the orchestra performed The Sun Shines on Taxkorgan, written by Chinese composer Chen Gang in 1976 and inspired by folk music of Taxkorgan, Northwest China's Xinjiang Uygur autonomous region, and Pastoral Song, written by Sha Hankun in 1953 while he was a student at the Shanghai Conservatory of Music. Sha wrote the piece as a homage to urtiin duu, a traditional folk long song of the Inner Mongolia autonomous region.

Chinese violinist Lyu Siqing played as soloist with the orchestra on the two pieces.

When Xia led the orchestra to perform Spring Morning of the Pamirs-the first episode of the symphonic suite, Tune of the Silk Road composed by his father, Xia Zhongtang, in 1992-it was an emotional moment.

"I grew up listening to my father's work and one of the most memorable pieces is Spring Morning of the Pamirs, in which he portrays the snow-covered mountains and lakes of the Pamir Plateau," recalls the 38-year-old maestro.

"Whenever I conduct this piece, it takes me back to my childhood, which is very personal and intimate," Xia says.

Xia studied piano as a child and graduated from the Central Conservatory of Music with a major in conducting. He has been working with China Philharmonic since 2007.

During the second half of the concert, erhu player Jiang Jianhua, who has been performing and living in Japan since the 1980s, performed Red Plum Capriccio, composed by Wu Houyuan in 1980 for erhu and symphony orchestra.

"I enjoyed the opening piece very much, it was very oriental. The sound of violin, along with the orchestra, made the whole piece powerful," said one Japanese audience member after the concert to China Central Television. "The music pieces combine Western symphonic music with unique elements from China, which is picturesque and vivid."

During the encore, musicians performed a well-known Japanese song, Flowers Will Bloom, which turned the audience in the concert hall into a large choir.

"The Japanese musicians interpreted each note with accuracy and they presented this contemporary piece well. The sound in the hall was great," says composer Ye, who is also the chairman of the Chinese Musicians Association.

China Philharmonic kicked off a world tour in September to celebrate the 70th anniversary of the PRC, during which it has performed with world-leading symphony orchestras. The first concert was performed with Chinese conductor Xu Zhong and the Royal Philharmonic Orchestra in London on Sept 16, followed by collaborations with the Philadelphia Orchestra, the Mariinsky Orchestra, Orchestra Filarmonica della Scala and Orchestre National du Capitole de Toulouse. Chinese conductors, including Tan Dun and Tang Muhai, joined the tour.