Japanese conservative forces attempt to use a dispute over sovereignty with China to interrupt fast-recovering bilateral relations, said Chinese diplomatic experts on Tuesday, after a local government in Japan mulled to change the Diaoyu Islands' administrative designation. 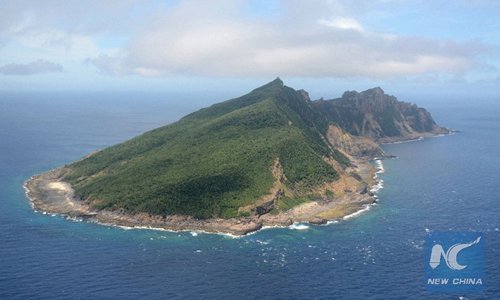 Diaoyu Islands in the East China Sea and its affiliated islands have always been China's inherent territory. (Photo: Xinhua)

The city government of Inshigaki, Okinawa Prefecture, is seeking to change the administrative designation of the area containing the so-called Senkaku Islands, China's Diaoyu Islands, from Tonoshiro to Tonoshiro Senkaku, Japan's Asahi Shimbun reported on Sunday

The city office confirmed with the Global Times that the proposal was submitted to the city council at a routine conference on Tuesday, and the council will vote for the proposal on June 22.

Li Haidong, a professor at the Institute of International Relations of the China Foreign Affairs University, told the Global Times that the Diaoyu Islands dispute between China and Japan is still unsolved and is not likely to be solved in the short term, so both sides should manage the dispute carefully to prevent an escalation.

"Changing the administrative designation at this time can only make the dispute more complicated and bring more risks of a crisis. This will cause more uncertainties to recovering China-Japan ties," Li said.

This could be a move initiated by local conservatives in Okinawa, and they do not stand for the interests and policy of the Japanese central government in considering the impact on China-Japan ties in general, Li further noted.

Chinese analysts also noted that the US could be maneuvering behind Japanese local conservative groups, as the US has now identified China as its most important strategic rival, and the Trump administration doesn't want to see Japan repair its ties with China, but instead wants it to stand with Washington to challenge Beijing.

The US, which will chair the G7 summit this year, is now planning to form an international alliance based on the G7 to confront China,  but such plan received lukewarm responses from other major Western powers, including Japan and Germany.

"If Japan decided to have an intensive confrontation with China on the Diaoyu Islands, the 'support' from the US will mostly be words rather than actions, and eventually Japan will pay the price," Li said. So it would be very unwise to restart a confrontation with China over a sovereignty dispute this time, especially when the two countries, as well as South Korea, are trying to work together to realize economic recovery in the region.

"The Chinese Coast Guard vessels followed and monitored the boat in accordance with law, asking it to immediately halt its activities and leave the relevant waters, and responded to the illegal disruption by a Japan Coast Guard vessel that came to the spot. The Chinese side has lodged representations with the Japanese side through diplomatic channels, urging it to immediately stop its infringements," he noted.

"I want to stress that Diaoyu Dao and its affiliated islands are an inherent part of China's territory, and it is our inherent right to carry out patrols and law enforcement activities in these waters. We ask the Japanese side to honor its four-point principled agreement with China, avoid triggering more incidents relating to the Diaoyu Dao and make concrete efforts for stability in the East China Sea," Zhao further said.