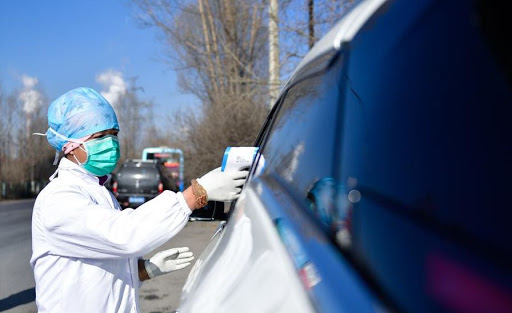 BEIJING, Feb. 12 (Xinhua) -- Disinfect the soles of your shoes and iron your outerwear before entering the workplace. Dine in the cafeteria in rotation and sit at least two meters away from your fellow workers.

These are just some of the measures Japanese company Musashino Chemical (China) Co., Ltd. has put in place to combat the spread of the novel coronavirus, as the firm located in east China's Jiangxi Province resumed operations this week after an extended Spring Festival holiday.

"We have taken full precautions as the safety of our employees is our top priority," said Fan Guizeng, the executive vice general manager of the firm, where nearly all of its 150 employees have returned to work.

Like Musashino, many Japanese companies in China have gradually resumed operations this week after implementing detailed safety measures. Some of them have offered flexible working hours and working-from-home options for their employees due to the virus outbreak.

At Suzhou Nihon Dempa Kogyo Co., a Japanese firm specializing in crystal-related products, about half of its 1,128 employees had returned to work since Monday.

Fujiwara Nobumitsu, the president of the company, said the local government had set up a service team to provide timely information for foreign firms, which greatly helped their resumption of operations.

"Our staff in human resources and manufacturing are fully cooperating with the government to provide information about our employees and take precautionary measures against the virus," said Fujiwara.

But the president also expressed concerns over his company's current production output, citing the absence of the company's out-of-province employees as well as those in its downstream partners.

"We are looking forward to seeing our suppliers resume operation in a timely manner while giving full consideration to combating the outbreak," said Fujiwara. "Through our concerted efforts, I am confident we will overcome the obstacles, and the Chinese economy will be back to normal."

In Pinghu Economic Zone in east China's Zhejiang Province, over 80 percent of the 30-plus Japanese companies had resumed operation by Tuesday.

At Nidec Shibaura (Zhejiang) Co., Ltd., more than 1,100 workers have returned to work. The company has disinfected all public spaces and ordered workers to dine in rotation.

"Though the precautionary measures have added a lot of work, they are crucial to containing the virus and the development of our firm," said Zhang Yuping, a manager at the company's general affairs department. "We will fully implement these measures."

On Monday, the Ministry of Commerce issued a circular urging local authorities to provide better services for foreign-funded enterprises amid the outbreak of the virus. Efforts should be made to help foreign-funded companies resume production and operation in an orderly manner.

More than 20 factories across China under the U.S. agribusiness giant Cargill have resumed production, following the instructions of local governments in a bid to guarantee supply amid the epidemic outbreak. One of its feed plants based in Hubei Province, which is the hardest hit by the virus, has not yet resumed work.

Despite the toll the epidemic has taken on business activities in China, many executives expressed confidence that the negative impacts are short-lived and the country will resume its growth momentum.

In Ricoh China's Shanghai office, mask-wearing office workers had to undergo body temperature checks before work and sat at least a meter apart from each other. The company also extended lunch hours to avoid the gathering of people.

"The epidemic is short-lived but we are pursuing long-term development," said Koji Miyao, CEO of Ricoh China, in a letter to the company's employees and business partners.

This year, the company will further tap its technological advantages and push forward a digital-based working mode, said the CEO.

Hideki Ozawa, president and CEO of Canon (China), said the company has donated 3 million yuan (about 429,000 U.S. dollars) worth of high-end Aquilion Lightning CT equipment to the virus-affected regions to combat the epidemic.

While gradually resuming some of its business operations, Mitsubishi Electric Corporation encouraged all staff members to work from home for the time being.

"The company's business might be negatively affected to a certain degree from the epidemic as some employees still need in-house isolation for a few more days and some clients are based in Wuhan," the epicenter of the virus, said Tomizawa Katsuyuki, corporate executive of Mitsubishi and its chief representative in China. "But I see opportunities for the company's long-term development in China."

"Industries such as 5G and investments on food and healthcare are growing fast, which are positive," said the executive. "I believe China will fulfill its goal of high-quality development."

In Chengdu, the capital of southwest China's Sichuan Province, local authorities in the Chengdu High-tech Zone, where world-renowned enterprises, including Foxconn, Intel and Texas Instruments are based, are working around the clock to assist companies' epidemic prevention work while helping them launch orderly resumption of work.

"With timely and sufficient guidance by local authorities, we have laid out a detailed emergency prevention and control plan before Feb. 1 and more than 30 employees have returned to work since Monday," said Mitsushige Nakashima, general manager of the Idemitsu Electronic Materials (China) Co. Ltd, located in the Chengdu High-tech Zone.

To ensure the safety of employees and their families, the company allocated thousands of masks from its headquarters in Japan, some of which are used by its employees while others are donated to the high-tech zone.

"Though it's not a very large number of masks, we will try our best to overcome the difficulties together with Chengdu," Nakashima said.

With many people staying at home amid the efforts to combat the virus, online activities are buzzing, so is Japanese retailer Ito-Yakado.

To deal with the surging online demand, Ito-Yakado has doubled the kinds of products it sold online, with daily orders reaching up to 1,600, four times higher than usual.

"During this year's Spring Festival holiday, the passenger flow to our store curtailed by 30 percent compared with the same period last year, the turnover, however, tripled," said Li Lijuan, head of a brick-and-mortar store of Ito-Yakado in Chengdu.

"Almost all of our staff are now on duty, providing our customers with high-quality services," Li said.