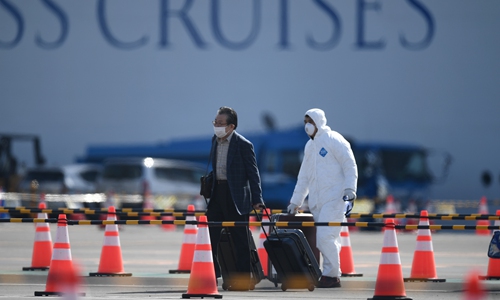 A passenger (left) disembarks from the Diamond Princess cruise ship - in quarantine due to fears of the novel coronavirus - at the Daikoku Pier Cruise Terminal in Yokohama on Wednesday. Relieved passengers began leaving the coronavirus-wracked cruise ship in Japan after testing negative for the disease. (Photo: AFP)

A Japanese professor of infectious diseases, who was dubbed a "whistleblower," apologized and removed a video where he accused the Japanese government of failing to send resident medical professionals to the quarantined cruise ship in the country, which led to the spread of the COVID-19.

"I removed my YouTube clip myself since there is no need for further discussing this. Thank you and I apologize to those who got involved," Kentaro Iwata said Thursday on Twitter. Iwata is an infectious diseases professor at Kobe University, who has dealt with infectious outbreaks, including Ebola and SARS, for more than 20 years.

Iwata posted a video on Youtube after he had entered the Diamond Princess, a quarantined cruise ship at the port of Yokohama in Japan, which reported 621 people on board infected with the coronavirus as of Wednesday.

Japanese media outlet NHK reported Thursday two passengers died after disembarking from the ship and being sent to hospital.

Iwata said in the video that the Japanese Ministry of Health, Labor and Welfare failed to send resident medical professionals to help control the epidemic on the ship and led to the spread of the virus and the loss of opportunities for timely treatment.

Many netizens in China and Japan on social media platforms said Iwata may have been pressured to remove the video and called him a "Japanese whistleblower" of the epidemic.

Japan's Ministry of Health, Labor and Welfare told the Global Times on Wednesday that the Japanese government has sent infectious disease professionals and psychological counselors to the ship, denying Iwata's accusation.

The ministry noted that most people on board would go back home after disembarking; some people who had close contacts with the patients would stay at facilities arranged by the Japanese government for a 14-day quarantine and go home if they later test negative for the virus.

Japan is taking active moves against the epidemic and large-scale infections are unlikely to happen in the country, said the ministry.