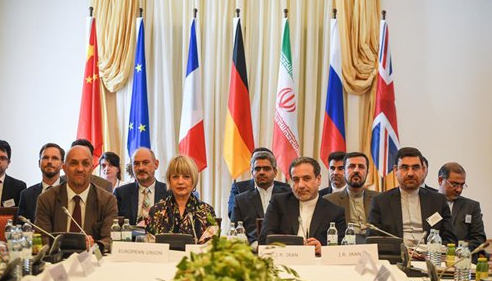 The remaining Iran nuclear deal signatories reaffirmed their commitment to the Joint Comprehensive Plan of Action (JCPOA) and criticized the United States for its unilateral sanctions during a meeting here on Sunday, according to a Chinese delegate.

"I have two take-away messages from today's meeting," said Fu Cong, director general of the Department of Arms Control at the Chinese Foreign Ministry, at a press conference following the meeting. "First, all sides have expressed their commitment to safeguard the JCPOA and to continue to implement the JCPOA in an objective manner, and a balanced manner."

"The second point I take away from the meeting is that all sides have expressed their strong opposition against the US unilateral imposition of sanctions, especially the extraterritorial application of the sanctions, and they also expressed support and appreciation of China's efforts to implement the JCPOA, in particular China's effort to maintain normal trade and oil relations with Iran," Fu said.

"Discussions were good. I cannot say that we resolved everything. I can say there are lots of commitments," Araqchi added.

The meeting was convened at the request of France, Germany, Britain and Iran to examine issues linked to the implementation of the JCPOA in all its aspects, according to diplomatic sources based in Vienna.

At the meeting, China urged the three European countries to expand INSTEX, a payment system to facilitate trade between the EU and Iran to get around US sanctions, and open it up to third countries, said Fu.

There were tense moments but on the whole the atmosphere was "professional," he said.

There was a general agreement that a foreign minister's meeting may be held, but more preparations are needed for this meeting to happen, Fu said.

In a press release published following the meeting, the EU said that "both nuclear commitments and sanctions-lifting are essential parts of the agreement", and participants would "continue discussions at expert level on sanctions-lifting and nuclear issues".

"Participants reaffirmed their strong support and collective responsibility for the nuclear projects (in particular Arak and Fordow) that are an essential part of the JCPOA in order to ensure the exclusively peaceful nature of Iran's nuclear program," according to the EU.

The JCPOA was inked in 2015 between Iran and the United States, France, Russia, Britain, Germany, and China. Washington unilaterally withdrew from the landmark deal last year and resurrected sanctions on Teheran.