"Don't claim there are no more challenges when you go downhill, as this would be misleading to others; there are always difficult mountains to scale, one after another."

That was a line from a Song Dynasty (960-1279) poem that former French Prime Minister Jean-Pierre Raffarin used to comment on China-France relations when addressing the opening ceremony of the 15th China-France Economic Seminar in 2009.

During his first visit to Hong Kong in 1971, Raffarin gazed through a telescope across the hazy ocean at the mysterious Chinese mainland and determined that he would set foot there some day. In 1976, Raffarin had an opportunity to visit the Chinese mainland together with a delegation of young French politicians. This time, he no longer had to use a telescope. From Harbin in the north to Guangzhou in the south, Raffarin traveled across China and fell in love with Chinese food and culture, thus beginning his special relationship with this country. 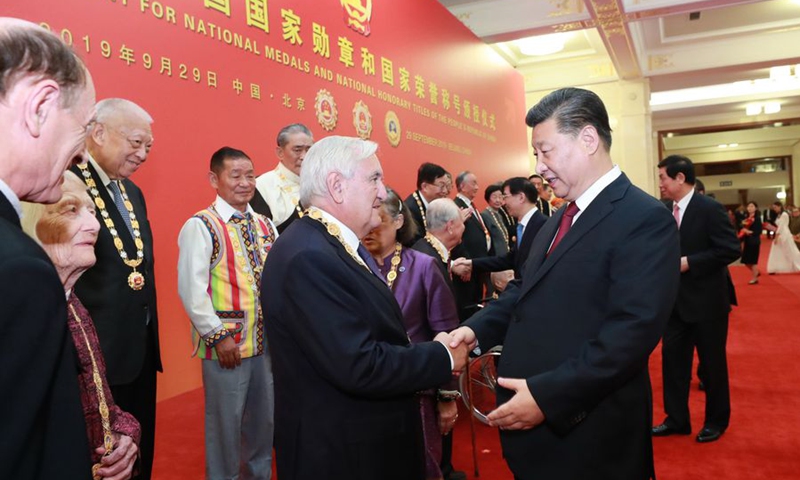 On September 29, 2019, General Secretary of the CPC Central Committee, Chinese President and President of the Central Military Commission Xi Jinping presented the Friendship Medal to Raffarin and talked with him at the Presentation Ceremony for National Medals and Honorary Titles at the Great Hall of the People in Beijing. (File photo)

It is by no means easy to find a heart that truly understands.

What made Raffarin a household name in China was his "extraordinary act" in 2003. When China was hit by the Severe Acute Respiratory Syndrome (SARS) epidemic, many foreign leaders canceled their visits to China out of fear. Then French Prime Minister Raffarin, undaunted by the risks, insisted on visiting China as scheduled. Then Chinese Premier Wen Jiabao said it was of great significance that Prime Minister Raffarin visited China at the critical moment of the Chinese people's fight against SARS. It underlined the importance France attached to developing relations with China and the friendship of the French people toward the Chinese people. Raffarin responded by saying that he led a delegation to China to express the French government and people's sincere support to the country as it fought the SARS epidemic. It was a sign of France-China friendship and mutual trust, and fully demonstrated the great importance France attached to developing the comprehensive partnership with China.

China-France relations hit a low point in 2008 due to the Beijing Olympic torch relay incident in Paris. At the critical juncture, Raffarin was appointed special envoy for China-France relations. He accompanied then French President Nicolas Sarkozy to the opening ceremony of the Beijing Olympic Games and facilitated a turnaround of the relations between the two countries. When talking about a handful of people's clamor for boycotting the Beijing Olympics with then Chinese Premier Wen Jiabao, Raffarin said he was firmly against such an attempt that undermines solidarity and peace among countries and peoples. He said that China could host the Olympic Games because of its openness. France should not respond to China's openness with isolation. So he was not in favor of the so-called boycott. He believed that everyone should see clearly that the Chinese people were always friends of the French people. Wen Jiabao responded by saying that Raffarin had stressed many times that countries should respect each other's sovereignty and territorial integrity, that Raffarin supported China in hosting the Olympic Games and opposed linking sports with politics, and it reflected Raffarin's deep friendship and affection for the Chinese people.

A promise made is a promise kept.

Wei Zheng, a statesman of the Tang Dynasty (618-907), stressed the importance of keeping one's word in one of his poems. The friendship between Raffarin and Chinese leaders has highlighted the importance of credibility and keeping words between friends, which has become a touching episode in the history of the CPC's external exchanges.

After leaving office, Raffarin has been active in people-to-people diplomacy. He vigorously promoted Belt and Road cooperation, attended the first Belt and Road Forum for International Cooperation as representative of the French President, and worked actively to shape an objective understanding of and participation in Belt and Road cooperation by the French and Europeans. As an expert on China, he and his wife co-authored the book What China Has Taught Us, which was published in China. He used various occasions and platforms to promote China and the China-France friendship. He made active efforts for world peace and development and for the settlement of international and regional issues. His efforts have been applauded by the Chinese government and people and he is known as "an old friend of the Chinese people."

The Chinese people are always generous when it comes to honoring old friends. In 2019, on the eve of the 70th anniversary of the founding of the People's Republic of China, Raffarin was awarded the Friendship Medal by President Xi Jinping, who expressed his appreciation to Raffarin and other good and old friends who had given long-standing support and help to China, for their contributions to China's development. President Xi added that the Chinese people would work with the people of all other countries to build a community with a shared future for mankind and make our planet a better place. Raffarin, on his part, cherished very much the honor of the Friendship Medal award given by his Chinese friends, and said that the Chinese people regarded him as an envoy of friendship, which is a recognition of his work. He would help the world better understand China, its creativity, history and civilization.

Everyone needs to accept differences and embrace diversity.

The ancient Chinese philosopher Confucius advocated "harmony without uniformity," which means that a gentleman can maintain a harmonious and friendly relationship with others without having to agree with them on specific issues. It is also applicable to relations between countries. Raffarin is one of those foreign friends who understand the essence of this idea.

In recent years, a few politicians in the United States and other Western countries have once again played up the "China threat theory." Raffarin said in a recent interview that some Westerners had a fear of China. Some refer to the Thucydides's Trap, and believe that the United States and China are destined for war. Some think China would be a threat when it becomes powerful. This is a clear reflection of their ignorance of China's culture of peace. Raffarin believes China has all the intellectual, philosophical and cultural means to manage this fear of China in the West, because culture is the best language to explain China's commitment to peace.

He also refuted the "double-standards" by the United States and other Western countries on various issues concerning China. He said that culture, like "understanding" and "peace," needs to be learned and cultivated. It will not fall from the sky. Similarly, "respect" and "friendship" also need to be learned and nurtured. To love and understand China, one has to have a willingness to love this country and accept its differences, because differences don't exclude commonality and commonality doesn't become less important just because there are differences.

Fifty years have passed, and Raffarin is well in his seventies. However, his understanding and respect for the path of socialism with Chinese characteristics that the Chinese people have taken under the leadership of the CPC remains unchanged. According to him, China is following its own path, the path of socialism with Chinese characteristics. Upholding the CPC leadership is the defining feature of the path of socialism with Chinese characteristics. It's not difficult for careful observers to find that the CPC is the pillar of the People's Republic. President Xi Jinping has promoted ambitious reforms of the CPC, the backbone of the country, to make the Party more efficient, more committed and closer to the people. It's not the people serving the Party, but the Party serving the people. That's important, and what matters most.