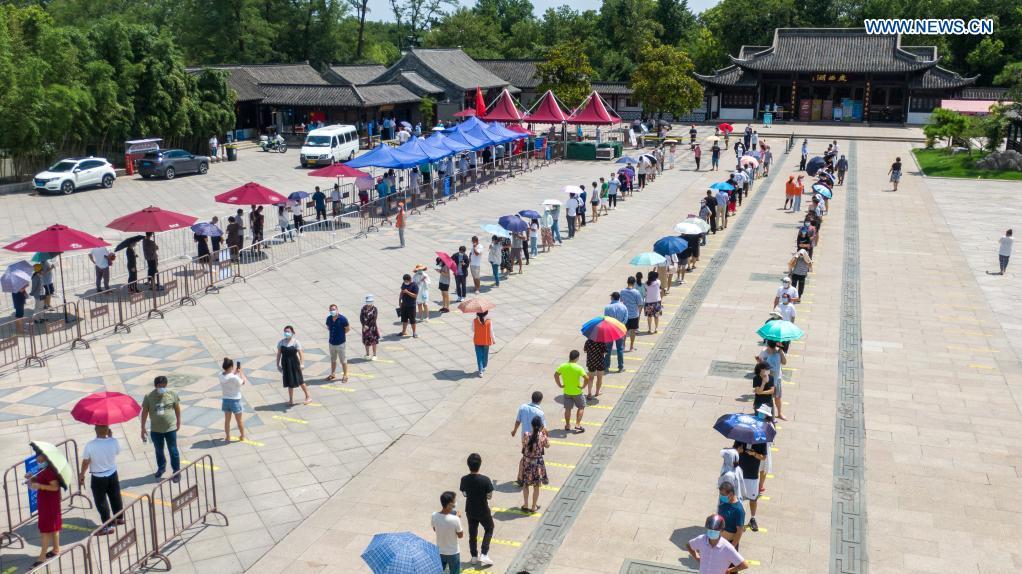 Among the cases, two were in Nanjing and 36 were detected in Yangzhou. Since July 28, Yangzhou has reported 308 local cases, including 19 in serious condition and another six in critical condition.

“Yangzhou has finished the fourth round of nucleic acid testing collection in its downtown areas on Sunday,” said Wang Jinsong, deputy director of the city’s Health Commission, at a news conference Sunday. “Over 1.58 million samples have been collected and sent for test.

“As the designated hospital for COVID-19 patients, Yangzhou Third People’s Hospital has received 158 patients,” he said. “The transformed work of its No 5 building has been completed and will be put into use after experts’ acceptance test. It will provide 53 more beds.”

Seven areas have been classified as medium risk for COVID-19 in the Slender West Lake scenic area in Yangzhou, Jiangsu province, an official said on Saturday.

“A mahjong lounge named Hongyuan located in the scenic has become the key site for the spread of the recent outbreak,” said Liu Magen, deputy Party secretary of the scenic. “At least 18 locally transmitted confirmed COVID-19 cases have been found to have visited the lounge since July 28.”

A 70-year-old woman surnamed Mao was diagnosed as confirmed case on July 28 after being found to be positive for coronavirus during tests conducted on close contacts of the first confirmed case in Yangzhou.

Before that, she often visited the lounge to play mahjong.

A total of 1,553 close contacts in the scenic have been traced and put under quarantine for medical observation, said Liu.