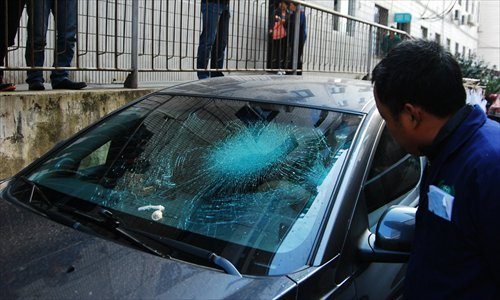 A man inspects a car windshield smashed by a condom filled with unknown liquid. The condom was dropped from atop a high-rise building on November 5 in Jiande, East China's Zhejiang Province. The car's owner, surnamed Ye, reported the incident to police after making the discovery. (Photo: CFP)

A woman surnamed Xu in Liyang, East China's Jiangsu Province, was sentenced to six months in prison and fined 2,000 yuan ($309) for throwing two kitchen knives from a three-story building on March 1, the first day when tossing objects from high-rise buildings can be used as a separate charge in the amendment of the Criminal Law.

Xu threw the knives from the third floor into a public rental housing area during a quarrel, prompting downstairs neighbours to call the police, according to a press release from the Jiangsu Higher People's Court.

The people's court in Liyang ruled that although Xu's actions had not led to severe injuries or property losses, it constituted the crime of throwing objects from high-rise buildings, and sentenced Xu to six months in prison.

According to articles under the amended Criminal Law, throwing objects from high-rise buildings and causing serious consequences can be punished by up to a year in prison.

With the increase in the number of high-rise buildings in cities, the frequent reoccurrence of falling objects have threatened the safety of citizens, as even a small object can cause serious injury to people due to high-altitude gravitational inertia, lawyers said.

In 2019, a middle-aged woman was hit on the head by a fire extinguisher that fell out of a high floor of a building in Southwest China's Guizhou Province. She was immediately sent to the emergency room but died of her injuries, according to CCTV.com.

Some communities have had to install the upward-pointing cameras in order to prevent such incidents from reoccurring.

In 2019, a community in Hangzhou, East China's Zhejiang Province had 47 upward-pointing surveillance cameras installed to protect residents by monitoring their windows and balconies.