CHINA Jiangxi steps up efforts to fight against poverty

Jiangxi steps up efforts to fight against poverty 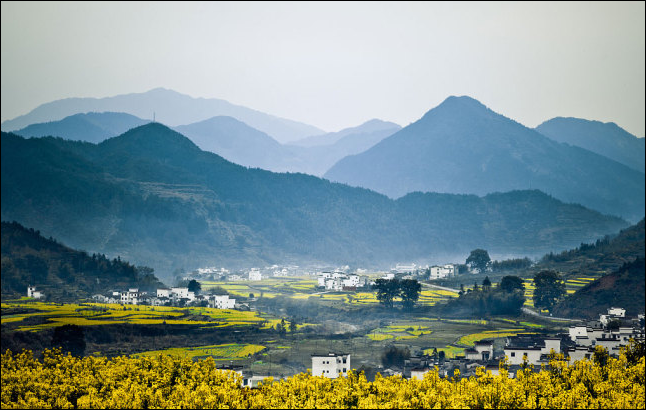 A view of a beautiful scene in Wuyuan, Jiangxi Province. (File photo: VCG)

The Jiangxi provincial government said it was well on track to reach its goal of pulling out of poverty almost half a million people this year.

President Xi Jinping stressed that the masses of its old revolutionary base areas must not be left behind in the process of building a well-off society in an all-round way at a discussion with deputies to the Third Session of the 12th National People's Congress (NPC) and Chinese People's Political Consultative Conference (CPPCC) from Jiangxi Province in Beijing in 2015.

Xi called on people to fight hard against poverty and share the fruits achieved by building a well-off society in an all-round way. Therefore, the province committed itself to winning the hard battle against poverty, while strengthening the environmental protection.

Lan Nianying, NPC deputy and party chief of Xinyue Shezu Village in Zixi County, Fuzhou City, Jiangxi Province presented a report on her work in poverty alleviation projects at the NPC session in 2015. She recalled fondly how President Xi Jinping engaged her on the details of the report.

"President Xi asked me whether the highway here had been opened. I said it is being constructed. Then he asked if our farmhouse had been started. I said we are preparing," recalled Lan.

Back in the village, Lan Nianying started a travel agency relying on the unique natural advantages of the village. Since the opening of the road leading to the county in 2016, tourism has been grown rapidly there.

The village has become a leading example for rural tourism. More than 10,000 tourists were recorded during this year's Spring Festival. Villagers, with an annual income of 13,000 yuan per person, have all witnessed their lives being lifted out of poverty.

During the "Two Sessions" in 2015, President Xi Jinping also emphasized the importance of environmental protection, saying that the environment is the people's livelihood, and that the green mountain and blue sky can bring happiness to them.

Following President Xi's call, the province has established a working committee on ecological environment protection, which is under the responsibility of the Secretary of the provincial party committee and the governor of the province. It consists of ten professional organs forming a full-scale environmental protection design, with the whole society as well as different departments involved.

Since 2018, Jiangxi launched 30 anti-pollution operations to improve air quality, as well as clean up rivers and lakes, among others. All enterprises in the city of Xinyu without sewage facilities were closed down. A three-month "river clean-up campaign" has been conducted in the city of Shangrao to improve the quality of rivers and lakes, as well as remove illegal structures.

As a result, Jiangxi's PM 2.5 density fell by over 20 percent last year from 2015, and the proportion of surface water with excellent quality in the province accounted for 92 percent.

"This year, we will further implement President Xi Jinping's thought on ecological civilization, and carry out his requirements for Jiangxi's work at a higher level. We are set to win eight major battles, and joint forces to promote high-quality economic development and high-level protection of the ecological environment," said Luo Xiaozhang, deputy director of department of ecology and environment of Jiangxi Province.