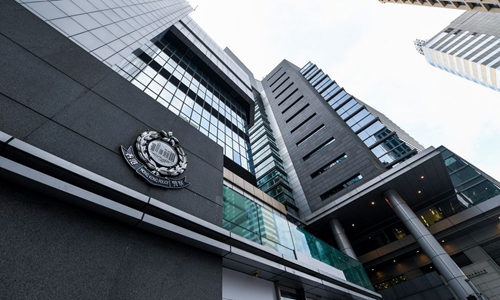 The arrested individuals, aged between 24 and 81, were suspected of violating Hong Kong's Public Order Ordinance by organizing and taking part in unauthorized assemblies on August 18, October 1 and October 20, 2019, police said at a media briefing on Saturday afternoon.

Lai, owner of anti-establishment tabloid Apple Daily, was detained at roughly 3 pm on Saturday at his residence in Ho Man Tin. He was then released on bail at about 8:30 pm, accompanied by a lawyer, local media reported.

Other detained anti-establishment figures include Martin Lee and ex-legislators Lee Cheuk-yan and Yeung Sum, according to media reports.

Experts noted bail is part of the practice of Hong Kong's judicial system, and will not affect subsequent prosecutions.

"If the arrested demonstrate they will cooperate with the prosecution process, they can be released on bail," Tian Feilong, an associate professor at Beihang University in Beijing and a member of the Beijing-based Chinese Association of Hong Kong and Macao Studies, told the Global Times on Saturday.

The arrested are scheduled to appear before a court on May 18.

Tian noted they may not receive harsh sentences based on their current charges, which are considered misdemeanors under Hong Kong's criminal code, but judges might impose deterrent punishments as their actions are increasingly damaging to the rule of law and social order in Hong Kong.

Observers also pointed out that the arrest and prosecution of the riot leaders help to clarify the legal boundaries of political participation rights in the Hong Kong Special Administrative Region (HKSAR) and have sent a clear message to activists participating in the riots, that freedom of political participation can only be exercised within the scope of the law and that whoever crosses the legal boundaries will face legal proceedings.

The months-long violent protests in Hong Kong severely hurt social stability and hindered economic development in the region, for which these riot leaders and behind-the-scenes puppet masters should be held mainly responsible, Li Xiaobing, an expert on Hong Kong, Macao and Taiwan studies at Nankai University in Tianjin, told the Global Times on Saturday.

However, analysts noted that the impact of the arrests could be diverse and complicated.

Tian warned that the HKSAR government should be wary of a possible rebound from the extreme anti-establishment forces, which might lead to another wave of violent or extreme activities.

"The supporters and followers of these pan-democratic figures might play up the detention and heroize the individuals, breeding anti-government sentiment in the public and triggering further conflicts in the region," he said.

Tian suggested the HKSAR government should prepare for a more complex social movement in the future, upgrade legal responses and strengthen the education and mobilization of Hong Kong citizens to safeguard the social stability of the city.