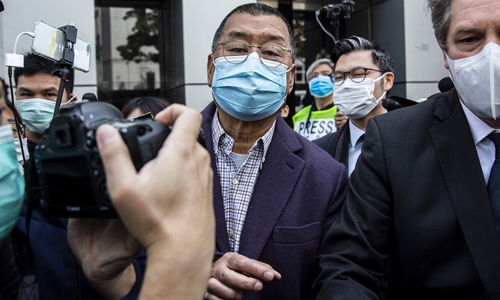 After days-long silence on the US unrest, Hong Kong riot leaders Jimmy Lai and Joshua Wong finally made their first public comments on the current crisis in the US.

However, their tricky comments, which revealed their embarrassment, faced criticism and mockery online, and whatever they say about the US riots is to propagate their anti-government agenda, analysts said.

Lai reposted a video from notorious extreme right-winger Australian politician Avi (Avraham) Yemini on Twitter on Tuesday, in which the latter claimed that comparing Hong Kong protests and US protests is undermining the legitimacy of the former without mentioning that the Americans are protesting against racism.

Lai cited Yemini's comment in his Tuesday's post: The riots in America are nothing like Hong Kong, and comparing the two is bloody disgraceful. And he said "@OzraeliAvi thank you for speaking for us #HKers," which infuriated and disappointed many netizens, including his supporters.

"The pro-Trump billionaire financier of the Hong Kong insurgency, Jimmy Lai, is quoting a noted friend of Nazis to demonize antiracists in the US. This should say everything," Net user Ben Norton tweeted.

Wong also posted on Twitter Tuesday, saying that he stood with the ongoing movement in the US and opposed police brutality.

Many netizens mocked the post, asking Wong if he was not afraid of losing US politicians' funding after making such comments.

"Do you condemn the violence by protesters? Words to your HK mobsters?" said another twitter user.

No matter what they say, they were just propagating an anti-government secessionist agenda and used whatever sources available to serve that agenda, Shen Yi, a professor at the School of International Relations and Public Affairs of Fudan University, told the Global Times on Wednesday.

Lai's siding with and flattering a notorious extreme right-wing politician shows his embarrassment and dead end in his anti-government secessionist agenda, Shen said, noting that he is actually indifferent to what African Americans are protesting against based on the video he reposted.

Yemini is an Australian extreme right-wing political activist known for anti-Islamic remarks. Some media call him a neo-Nazi. He was also convicted of assaulting his ex-wife in 2019.

In the video, Yemini claimed that, in the US, brutal policemen had been punished, including the one who killed Gorge Floyd. But in Hong Kong, where what Floyd suffered happened on a daily basis, brutal and spoiled policemen went without punishment. He also said that he never saw Hong Kong protesters looting like US protesters.

Apparently, Yemini ignored the root cause of the US protests - the long-standing problem of racism in the US, Chinese analysts noted. He is also absurdly wrong on many basic facts, as anyone who reads or watches news should know how Hong Kong rioters vandalized subway stations, smashed shops and attacked innocent residents and police and set fire to passengers who hold different view with them in the past year, analysts said.

When Lai and Wong's patron, the US, used an iron fist on African Americans which triggered domestic protests that eventually escalated into riots, it put them in an embarrassing situation that they had to whitewash Western double standards on riots with ridiculous excuses, analysts said.

They are cocky and manic in instigating activities jeopardizing law and national security in Hong Kong. No government will tolerate such activities, but they played the "hero" of justice and attacked police actions which helped maintain law and order, analysts noted.