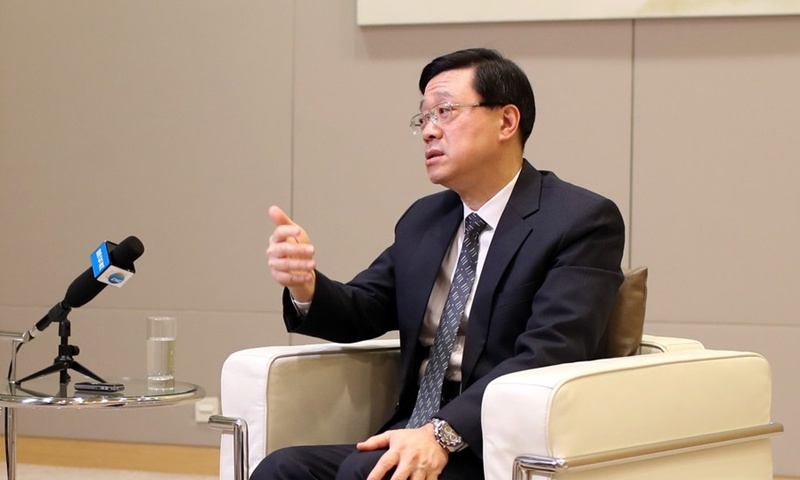 Secretary for Security of the HKSAR government John Lee Ka-chiu speaks during an interview with Xinhua in south China's Hong Kong on Jan. 28, 2021. (Photo:Xinhua)

Hong Kong's security chief John Lee said that media tycoon Jimmy Lai's bank accounts were frozen because the frozen assets are suspected of being involved in crimes under the national security law, and it isn't the same thing as interfering in ordinary people's assets, according to a report by news.rthk.hk on Thursday.

Lee made the comments following some overseas media reports that he had sent letters to Lai and branches of HSBC and Citibank this month, warning of up to seven years' imprisonment for any dealings with Lai's accounts in the city.

The letters were sent to Lai after Hong Kong authorities froze Lai's majority stake in Next Digital and local accounts of three companies owned by him.

HSBC declined to comment when contacted by the Global Times on Thursday, while Citibank couldn't be reached for comment as of press time.

John Lee said that there are reasons to suspect Lai's assets are involved in the crimes, after full consideration of the obtained materials, and therefore a move was made to freeze the assets with rights empowered by the national security law for Hong Kong SAR.

When asked if banks had lost their rights to safeguard the interests of their clients, Lee told the media that he moved to inform relevant companies and institutions of the potential penalties, because Lai had been charged with several offenses under the national security law, including conspiracy to collude with foreign forces to endanger national security.

Therefore, Lee said he had a responsibility to inform people of the relevant consequences if they didn't follow related legal guidance.

He also stressed that the move only targets assets related to crimes, and has nothing to do with normal business actions.

"I believe ordinary merchants would never do anything that hurts national security. The two things should not be tied up," he said.