Completion of important and extensive restoration work of buildings within the renowned imperial grounds has provided further impetus for inclusion of metropolis' central axis. 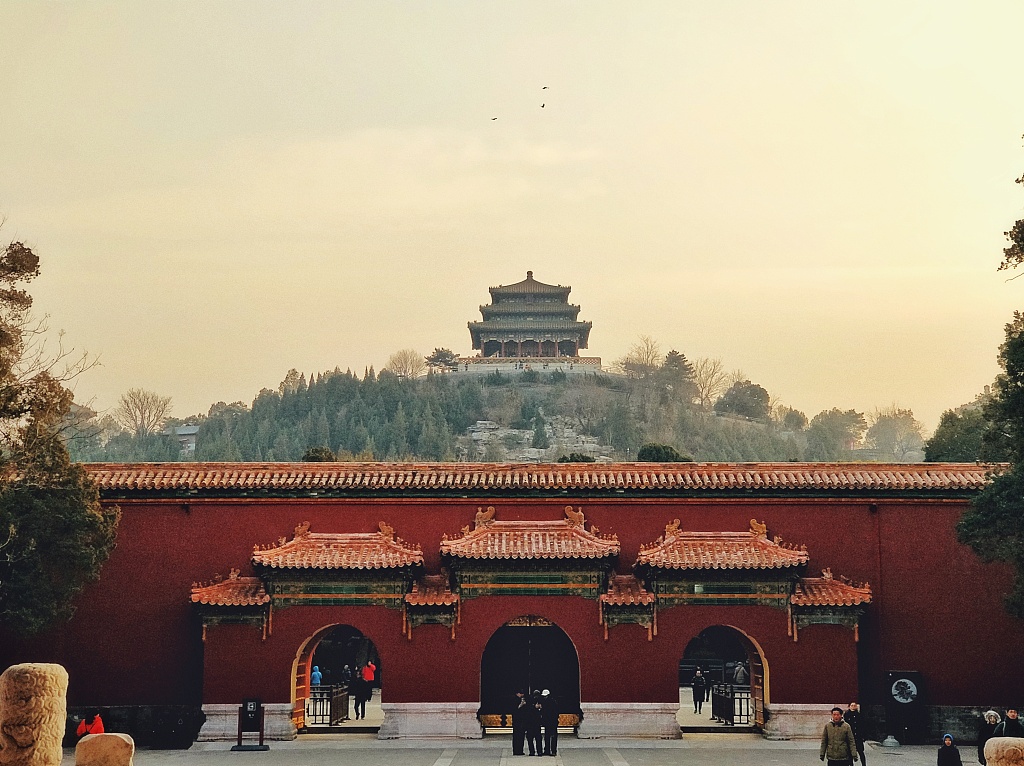 The photo taken on December 9, 2018 shows the Shouhuang Palace in Jingshan Park, which reopened its doors in late November after years of restoration. (Photo: VCG)

Beijing's famed imperial Jingshan Park is advancing the restoration of ancient buildings within its precincts, as part of the overall push to help the capital city's efforts in getting its iconic central axis - the roughly 8 kilometer notional line that runs along the capital's historic center and incorporates Tian'anmen Square - into UNESCO's world cultural heritage list.

Located in Xicheng district, the imperial park immediately north of the Forbidden City covers an area of 23 hectares. Shouhuang Palace at the park re-opened its doors after restoration, in November 2018. Standing at the center of the city, visitors can take in a bird's-eye view of the Forbidden City.

Jingshan Park is a major component of Beijing's central axis. The completion of the restoration will fully realize the integrity of the axis and the city's sound culture and environment, said Cong Yipeng, head of the park.

"We are striving to build Jingshan Park as a destination featuring culture and art," he said.

After restoration, Shouhuang Palace, one of the historic buildings in the park, was reopened to the public last year.

The renovation work on the palace started in 2016, with the support of the Beijing government and related authorities, Cong said.

"With the reopening of the palace, Jingshan Park will showcase more of its complete historic features to tourists and add luster to the capital."

Shouhuang Palace was built in the Ming Dynasty (1368-1644), covering an area of 21,256 square meters. The palace used to serve as a venue where the imperial family held ceremonies to venerate their ancestors. It is the second-largest historical building complex on Beijing's central axis, after the Forbidden City.

The palace shows the historical functions and Chinese culture of etiquette and ancestor worship. It demonstrates the changes in history and the unique charm of the city's central axis culture, Cong said.

"The park's work is also part of our effort to contribute to Beijing's transformation as a cultural center," he said.

The park will continue to restore other buildings and promote the environment in aspects such as culture and artistic charm, based on the capital's plan for cultural protection, he added.

Shu Xiaofeng, head of the Beijing administration of cultural heritage, told Beijing Daily that the removal of the temporary structures and the renovation of cultural relics should meet people's needs, as well as help in the process of applying for the central axis to join the World Heritage sites.

"We hope the attractions will open to the public as much as possible after the renovation work," he said.

Official data show that as of July 2018, a total of 14 historical sites existed along the axis, including the Zhengyang Gate, the Forbidden City and Jingshan Park.

These have been identified as key heritage sites and are expected to apply for the world heritage list in 2035.