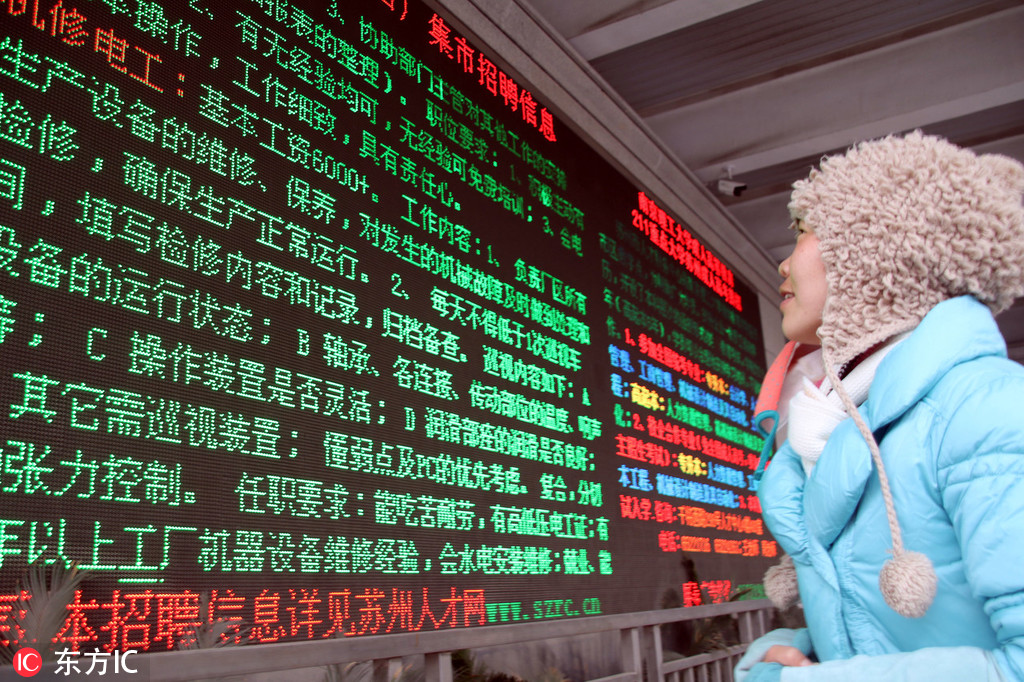 A job seeker looks at an information bulletin at a job fair in Suzhou, East China's Jiangsu province, on Feb 11, 2019. (Photo: IC)

Many cities in eastern China are organizing job fairs to meet demand for new employees after the Spring Festival holiday.

The first such event in Yancheng, Jiangsu province, opened on Monday with more than 10,000 jobs offered by 200 local companies. The fair aims to attract more college students and migrant workers, who usually return to their hometowns during Spring Festival for family reunions.

Most of the jobs are in manufacturing, catering and finance. There is also huge demand for employees in the machinery, sales and design sectors, said Zhang Chengyu, director of the Yancheng talent market.

"With the city's economic and social development, many people now prefer to work in their hometowns," he said. "We organized the fair to provide opportunities for them. More than 100 fairs offering 50,000 jobs will be held this year.

"Many companies pay salaries of more than 10,000 yuan ($1,474) a month. They need to recruit enough employees to guarantee post-festival operations."

Dai Yang, a graduate in mechanical engineering, said he would prefer to work in his hometown－Huaian, Jiangsu－if the salary met his demands.

"I can spend more time with my family and pay much less for a house than in a big city," he said. "I attended the first job fair to be held in my hometown on Sunday. I'm considering some job interviews and the salaries offered."

Among them are eight large job fairs starting on Feb 16. More than 900 companies are expected to attend each of the fairs, which will be held on Saturdays and Sundays for a month.

Cities such as Taizhou, Zhejiang province; Heze, Shandong province; and Nantong, Jiangsu province, will also hold many fairs for job hunters and employers in February and March.