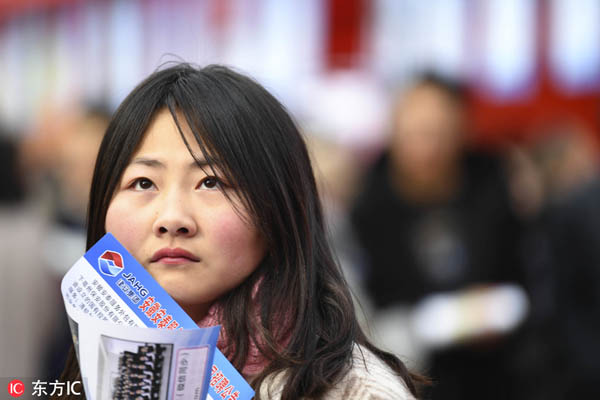 A college graduate is seen at a job fair in Bozhou, East China's Anhui province in this photo taken on Dec 7, 2018. [Photo/IC]

China's job market remained stable in 2018, but the country faces continued employment pressure this year, Minister of Human Resources and Social Security Zhang Jinan said in an interview on Sunday.

At least 15 million people will enter the job market, many seeking employment in urban areas this year, he said, noting that the number of new college graduates will reach a record high of 8.34 million.

"The pressure ... is no less than that in previous years," Zhang said.

Stabilizing employment will continue to be a priority of the government this year, and more positive policies concerning jobs will be released to help both young job hunters and the unemployed, Zhang said.

One of the major moves is to reduce burdens on enterprises and to invigorate them.

"Companies matter in employment stability," he said. "The job market will be stable if companies are well-operated."

He said that financial support will benefit entrepreneurs and founders of small and medium-sized enterprises.

Guaranteed loans to entrepreneurs are projected to increase to 150,000 yuan ($23,000) from 100,000 yuan, and bank loan assistance will rise to 3 million yuan from the previous 2 million yuan to help reduce companies' financial burdens and encourage startups, he said.

In addition, training courses will be given to workers to improve their skills or capacity to start their own businesses.

Zhang said the ministry started an internship project at the beginning of this year to help improve the employment rate of the younger generation.

One million youths involved in the project will get an internship position within the next three years to enhance their competitiveness, the ministry said.

The project, which was launched on Jan 1, is open to youths between 16 and 24 and to college students who failed to find a job within two years of graduation.

Other measures include a possible reduction of enterprises' social insurance premium rates. Companies with few or no layoffs can take half of the previous year's unemployment insurance premium back, Xinhua News Agency reported.