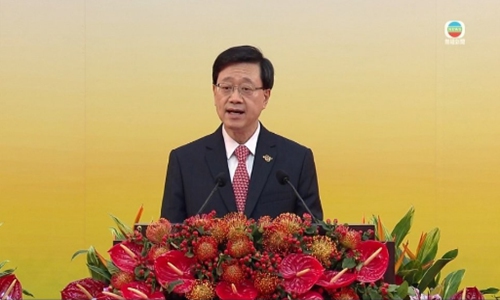 The sixth-term Chief Executive of the Hong Kong Special Administrative Region (HKSAR) John Lee Ka-chiu and the principal officials of the new-term government took their oaths of office at an inaugural ceremony on Friday, which also marked the 25th anniversary of Hong Kong's return to the motherland.

"I pledge to take the position of the Chief Executive and will uphold the Basic Law, assume responsibilities for the central government and the HKSAR government," Lee said reciting his oath.

Members of the Hong Kong Executive Council including Chief Secretary Eric Chan Kwok-ki, Regina Ip Lau Suk-yee, the convener of the Executive Council meeting, under the supervision of John Lee, were sworn in by pledging loyalty to the Basic Law and the HKSAR government.

In his speech, Lee thanked the central government and Hong Kong residents for their trust, and vowed to build a dynamic and harmonious Hong Kong full of opportunities.

Lee's appointment as chief secretary for administration came after the region's police force demonstrated professionalism and competence in the battle against a series of violent riots in 2019, according to observers.

Lee's appointment reflected that maintaining national security and social stability is one of the important tasks of the HKSAR government moving forward, and these tasks require decisive and responsible people, Lau Siu-kai, vice-president of the Chinese Association of Hong Kong and Macao Studies, told the Global Times.

He believes Lee will also study how to attract more patriotic forces and other forces in the community to support the government's policies.

Lau said that the first feature of the new government is that more talent from outside the government have assumed roles, which reflects a more stable political situation in Hong Kong, where the opposition forces that used to attack the government have been deterred and where it is less costly for elites and their families to join the practical work of the government.

Among the new officials, Beijing-born Sun Dong is the Secretary for Innovation, Technology and Industry, and Algernon Yau - former CEO of Greater Bay Airlines -is leading the Commerce and Economic Development Bureau.

The new HKSAR government will face an unprecedented, complex and increasingly hostile external environment and challenging internal environment, especially when geopolitical wrestling between the US and China becomes more intense, observers said.

Lee said previously that fixing the region's housing woes and implementing Article 23 of the Basic Law were among the urgent tasks faced by the new city government.