China’s ports and industry representatives have been ramping up efforts to tackle the stockpile of containers for cold-chain food imports amid the risks of imported coronavirus cases, logistics hurdles and the container shortage in many parts of the world. 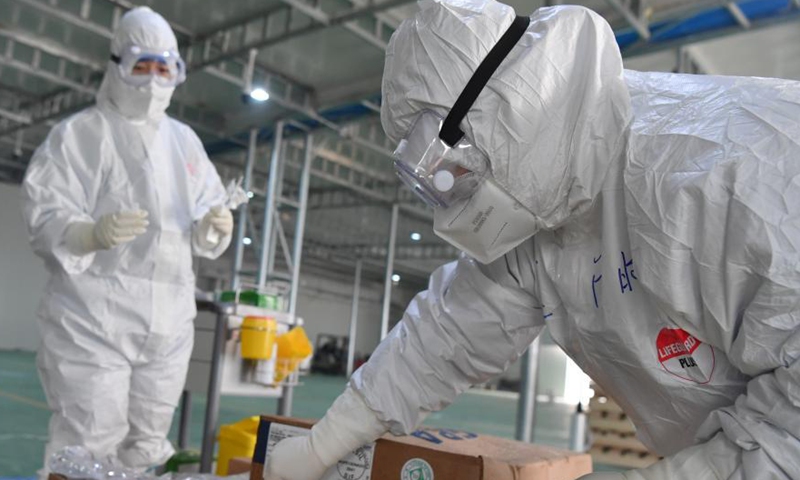 The huge pileup of fish cargo at Dalian, a major port for seafood imports, has led to low availability of electric outlets to keep containers refrigerated, Bloomberg reported Thursday.

The report said there could be an impact on the global supply chains from congestion at the port and the testing of food for the virus.

International freight rates have risen a lot, not because of demand, but because so many containers are sitting on docks, Weng Qiang, a purchasing manager at Sunkfa Holding Group, a leading Beijing-based seafood company, told the Global Times on Thursday.

An employee at the Port of Guangzhou, the world's fifth-largest port by throughput, told the Global Times that cold-chain imports have already dwindled under the current situation.

However, insiders from import and export companies and international logistics companies approached by the Global Times denied the report, saying that China exports more than it imports.

The problem of turnover of refrigerated containers is not due to testing for the coronavirus, said an employee surnamed Wilson from a Shanghai based import and export trading company.

“A lot of issues – from the time of unloading at the port, the speed of customs declaration, the efficiency of the consignee to the returning time – affect the turnover of the refrigerated containers,” he said.

Currently all food imported through cold chain containers needs to be tested for coronavirus before being sold on the market and the rest of the world has formulated similar anti epidemic policies according to the local situation, insiders said.

The testing for COVID-19 in cold chain imports at Chinese ports is proceeding at the normal speed and it is unusual for refrigerated containers to get stuck in the ports due to not passing the inspection by the Customs, a person from a Shanghai based international logistics company who did not wish to be identified told the Global Times on Thursday.

“In general, we export more than we import, which is why there has been a lack of refrigerated containers,” the person said.

Wilson also agreed that China is exporting fast enough but the return rate is slow.

“The biggest difficulty is the fact that the US epidemic is too serious and there is too much uncertainty about the US port of destination,” he said.

Meanwhile, the rising number of imported cases indicates the prevention work at the ports in China needs to be sustained despite the difficulties.

As of midnight on January 13, the national customs sampled nearly 1.3 million samples, and 47 nucleic acid positive results were detected, while other samples were negative, according to the latest report by the General Administration of Customs.

“The sterilization cycle is long and therefore leads to a backlog, which is common in almost all the ports across the country,” Qin Yuming, secretary general of the cold chain logistics professional committee of the China Federation of Logistics & Purchasing, told the Global Times on Thursday.