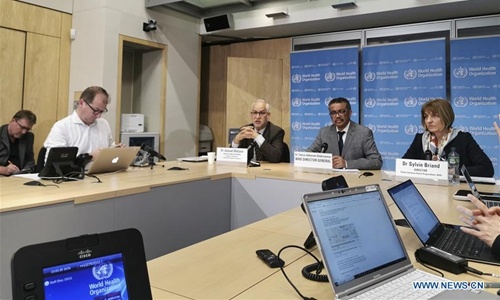 The World Health Organization (WHO) Director-General Tedros Adhanom Ghebreyesus (2nd R) attends a daily briefing in Geneva, Switzerland, Feb. 21, 2020. WHO said Friday that the window of opportunity to contain wider worldwide spread of the COVID-19 epidemic is narrowing, urging the international community to act quickly before it completely closes. (Photo: Xinhua)

An official report on Coronavirus Disease 2019 (COVID-19) released jointly by the World Health Organization and China’s National Health Commission identified the disease as a zoonotic virus and stated that there is no known pre-existing immunity in humans, and everyone is assumedly susceptible to infection.

According to the report, titled WHO-China Joint Mission on Coronavirus Disease 2019, which is based on analysis of data the WHO and Chinese health authorities gathered from February 16-24 in China, human-to-human transmission is largely occurring in families.

The report also found that people with COVID-19 generally show symptoms within five to six days, on average, after contracting the infection, and most people infected have mild symptoms and could recover.

However, individuals, including people aged over 60 and those with underlying conditions such as hypertension face the highest risk of severe conditions and even death, the report said.

COVID-19 is transmitted through droplets and fomites during close unprotected contact between an infector and infectee. Airborne transmission has not been reported for COVID-19 and it is not believed to be a major source of transmission based on available evidence, the report stated, which is in line with the Chinese health authorities' previous findings.

The initial cases diagnosed in Wuhan are believed to have contracted infection from a zoonotic source as many reported visiting or working in the Huanan Wholesale Seafood Market. As of February 25, an animal source is yet to be identified.

The cordon sanitaire around Wuhan and neighboring cities imposed since January 23 has effectively prevented further exportation of infected individuals to the rest of the country, the report added.

"In the face of a previously unknown virus, China has rolled out perhaps the most ambitious, agile, and aggressive disease containment effort in the history," the report hailed while elaborating, "The strategy that underpinned this containment effort was initially a national approach that promoted universal temperature monitoring, masking, and hand washing. However, as the outbreak evolved, and knowledge was gained, a science and risk-based approach was taken to tailor implementation."

The implementation of these containment measures has been supported and enabled by the innovative and aggressive use of cutting-edge technologies, from shifting to online medical platforms for routine care and schooling to the use of 5G platforms to facilitate rural response operations, it stated.