In an exclusive interview with China.org.cn in Beijing on Jan. 10, prominent American political scientist Joseph Nye commented on Chinese companies expanding overseas. Chinese companies should focus on creating high quality products and services, he noted, but also essential to their overseas success is a demonstrated adherence to local laws and environmental standards. 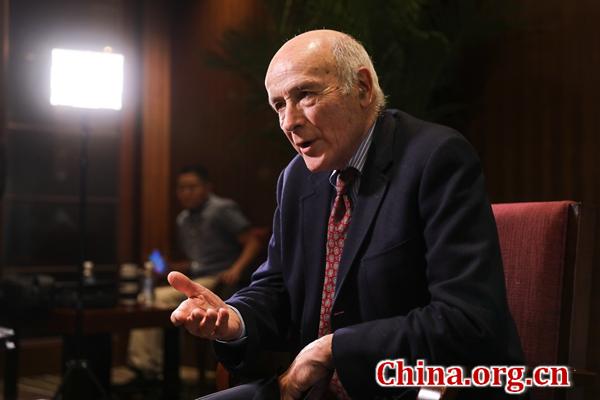 Nye is Professor Emeritus at Harvard's Kennedy School of Government. He was the first to put forward the concepts of "soft power" and "smart power."

Speaking on the sidelines of a seminar hosted by Ogilvy Public Relations in Beijing, he added that Chinese companies have great potential to help increase the country's soft power. However, those now navigating global markets should be careful to follow local rules and norms.

He also noted there is a discrepancy between what a company claims in its brand advertising and its actual behavior, such as the quality of its product or its adherence to strict standards.

Chinese companies are striving to cast off  an image as makers of cheap and shoddy goods. Over recent years, product quality has improved tremendously, but reputation in some markets still lags behind. Working on brand and reputation is critical to wining over the trust of foreign consumers.

In addition to Chinese companies, Chinese cities are also increasingly turning their gaze overseas. An array of Chinese cities, including Chengdu and Xi'an, have designed overseas marketing campaigns to lure overseas tourists and investors.

Joe Zhou, managing partner of Ogilvy and head of the firm's location branding work, said Chinese cities have a lot to offer, including unique tourist experiences, new technologies, business opportunities, and education, but cultural appeal should be the key element when it comes to promoting the city's image.

"Only by building cultural appeal, can Chinese cities earn greater recognition by the international community," he said.

"In the past, Chinese cities tended to focus on what they wanted to say, paying little attention to the overseas audience, but now they are beginning to consider and deliver what overseas audiences care about," Zhou said. "This is a big and important shift in branding strategy."