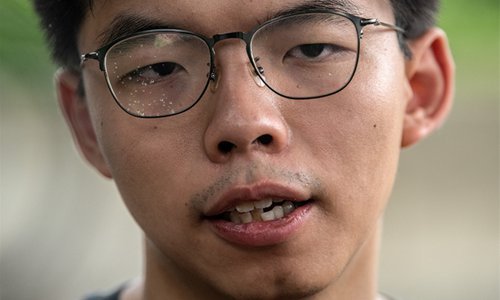 Hong Kong secessionist Joshua Wong Chi-fung was detained Thursday when he reported his whereabouts as a bailed suspect. The charges include attending an illegal gathering on October 5, 2019 and violating the anti-mask ordinance.

A lawyer is accompanying Wong to video the confessions, Hong Kong media reported.

In a statement sent to the Global Times, Hong Kong police said that two men, aged 23 and 74, were detained on Thursday for attending an unauthorized gathering at Causeway Bay. The 23-year-old also violated the anti-mask ordinance during the gathering.

The 74-year-old was reportedly Koo Sze-yiu who was active in street protests.

The case will be brought to the Eastern Magistrates' Courts on September 30.

Wong was arrested in August 2019 for organizing and participating in unauthorized assemblies and violently besieging police headquarters. He and was later released on bail.