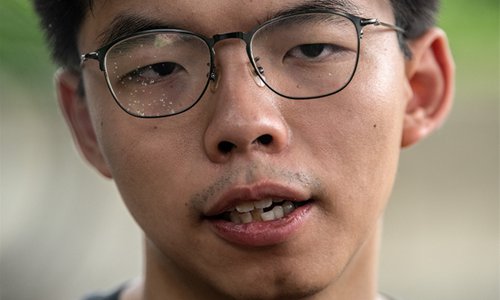 Hong Kong media reported on Monday that rioters have recently been calling on those in the UK to reveal more information about the police officer, who shot and injured a rioter after the latter tried to snatch his gun in November 2019.

Such posts first emerged on the LIHKG forum, a major social-networking platform used by rioters to incite violence, and Wong reposted the contents on his Facebook, asking another riot leader Nathan Law, who fled Hong Kong to the UK, to pay attention to the issue.

Hong Kong legal scholars noted that Wong's behavior may constitute contempt of court, as a West Kowloon court had earlier issued an order prohibiting anyone from publishing personal information about the police officer and his family.

Willy Fu, vice chairman of the Hong Kong Legal Exchange Foundation, said the move was aimed at harassing and intimidating the police officer. The LIHKG post and Wong's repost did not mention "police officer," but the name and photos and descriptions in the posts made it easy for people to recognize the person's identity, which may constitute the crime of intimidation.

Fu urged the police to follow the case, as it is not the first time that Wong has shown contempt of court.

Wong was sentenced to three months in prison for contempt of court during Occupy Central in 2014. He appealed and his jail term was changed to two months.

Johnny Ip Chun-yuen, a Hong Kong lawyer, said that Wong may also be in violation of the Personal Data (Privacy) Ordinance's section 64, which makes it an offence to disclose personal data obtained without consent from data users. The highest punishment for the violation is HK$1 million and five years in prison.

Wong disregarded the laws and also openly incited others to violate them. The relevant departments should take actions to show the spirit of the rule of law, Ip said.

Two men were arrested in June for publishing personal information of a protected police officer on social media, including the name and photo, Hong Kong media reported.