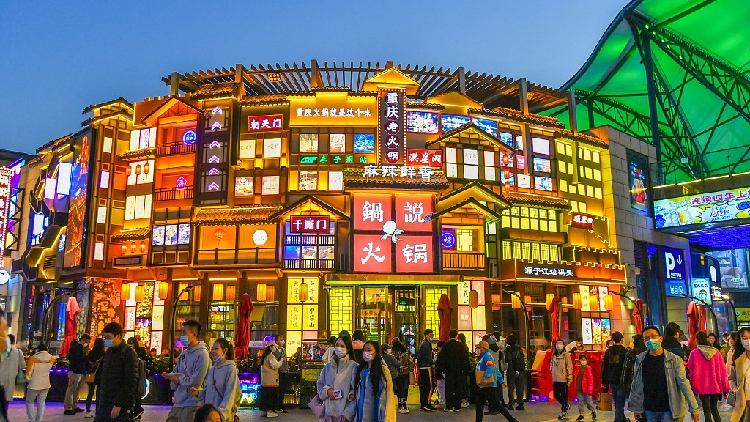 The annual Central Economic Work Conference, widely regarded as the wind vane for China's economic development and policy direction, has concluded in Beijing.

The two-day meeting on plans for the country's economic performance next year has prioritized increasing domestic demand by boosting consumption in order to promote growth amid pressure from "demand contraction, supply shocks and weakening expectations."

Analysts told China Media Group (CMG) that the tone-setting meeting has given a boost of confidence to China's economy.

In 2023, China will focus on boosting domestic demand by prioritizing the recovery and expansion of consumption, in what experts hail as "an initiative" China can take thanks to the size of its domestic market.

Consumption has become the largest driver of China's economic growth, with final consumption expenditure contributed 65.4 percent to the GDP expansion in 2021, up 10 percentage points from 2012, according to a report released by the National Bureau of Statistics in September.

Wu Sa, deputy director of the Institute of Economics Research with the Chinese Academy of Macroeconomic Research, said consumption is the sector that sees the largest room and the greatest potential of expanding domestic demand next year, though it has borne the brunt of the COVID-19 epidemic over the past years.

"To meet the economic growth target of next year, we must further increase consumption and help boost consumers' confidence," said Wu.

To that end, spending on improved housing conditions, new energy vehicles and old-age care services should be supported, as has been specified by the Central Economic Work Conference.

The meeting also stressed the need to increase the income of both urban and rural residents through multiple channels.

"I think we should do everything possible to help create jobs," said Xu Hongcai, deputy director of the Economic Policy Commission at the China Association of Policy Science. "In addition, the income distribution system should be improved and the social security system bettered."

As China pursues basic socialist economic systems, it has long been the country's commitment to "unswervingly consolidate and develop the public sector" and at the same time "unswervingly encourage, support, and guide the development of the non-public sector," a guideline that has been reiterated during the annual economic meeting.

"It shows the continuity and stability of China's policies," Xu Zhaoyuan, deputy director of the Industrial Economics Research Department with the Development Research Center of the State Council, told CMG.

"It is significant in terms of stabilizing the expectations of market players and boosting the confidence of the private sector," said Xu.

With a release of more than 4,700 Chinese characters issued on Friday, the Central Economic Work Conference reviewed the country's economic work in 2022, analyzed the current economic situation and arranged next year's economic work.

The meeting has made "very decisive and direct" responses and deployments to the market's and the society's key concerns, such as the COVID-19 epidemic, how to boost confidence in development, supporting the platform economy, resolving real estate risks, and some incorrect views about the private economy, said Luo Zhiheng, chief economist at the research institute of Yuekai Securities.

In his opinion, the Central Economic Work Conference is "straightforward, frank and honest," and has "made a full estimation of the serious challenges next year."

Dong Yu, executive vice-president of China Development Planning Institute at Tsinghua University, who has participated in the drafting of documents for the Central Economic Work Conference many times, said this year the press release is "particularly relevant" by highlighting the importance of "seeking truth from facts, respecting the law (of the economic work), and sticking to systemic and bottom-line thinking."

Xu Hongcai, the researcher with the China Association of Policy Science, said the meeting has reflected the problem orientation of the economic decision-making, and also actively responded to people's livelihood concerns, sending "a strong and positive signal" to the market and all the sectors of the society.

"Therefore, we should have solid confidence in next year's economic development," he said.