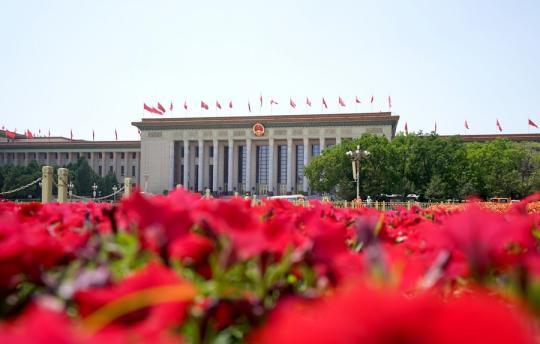 China must step up major moves in deepening reform and opening-up for the country's economic and social development during the period of the 14th Five-Year Plan (2021-25), a key Party meeting decided on Monday.

The Political Bureau of the Communist Party of China Central Committee also decided that the Fifth Plenary Session of the 19th CPC Central Committee will be held from Oct 26 to 29, according to a statement released after its meeting.

Participants underscored the importance of upholding overall Party leadership, improving socialism with Chinese characteristics and strengthening the ability to implement new development concepts in order to boost the economy and society during the coming five-year period.

Development should always be people-centered by ensuring their principal status and promoting their well-being, it was decided at the meeting. Efforts also were urged to build a new development pattern with the domestic market as the mainstay and the domestic and international markets reinforcing each other, earnestly transform the economic development mode and work hard for better quality, higher efficiency and more robust drivers of economic growth.

Major reform and opening-up moves should improve resource allocation efficiency and mobilize the initiative of the whole of society, it said.

The meeting stressed the importance of solidifying the foundation, leveraging strengths and tackling areas of weakness as well as paying attention to fending off and defusing major risks and challenges.

Participants at the meeting also listened to a report on consulting public opinion about a CPC document concerning the formulation of the 14th Five-Year Plan and targets for 2035.

The document, after being revised based on opinions discussed at Monday's meeting, will be submitted for deliberation at the fifth plenary session. Participants said that the document has fully absorbed opinions and suggestions from all quarters including governments and departments at all levels, public expectations, expert opinions and on-the-ground experience.

It is a vivid example of China's socialist democracy, they said.

Those at the meeting said that faced with the complex international situation and arduous tasks for domestic development, and especially amid the impact of the COVID-19 pandemic, the CPC Central Committee has assessed and dealt with the situation in a calm way and further promoted the development of all causes of the Party and the country.

With China nearly completing its goals and tasks of the 13th Five-Year Plan (2016-20), the country's economic and technological strength and the overall national strength will reach a new high, they said.

Meeting participants also reviewed a regulation on the work of the CPC Central Committee, which issued provisions on its leading position, leadership structure and self-building, among others.