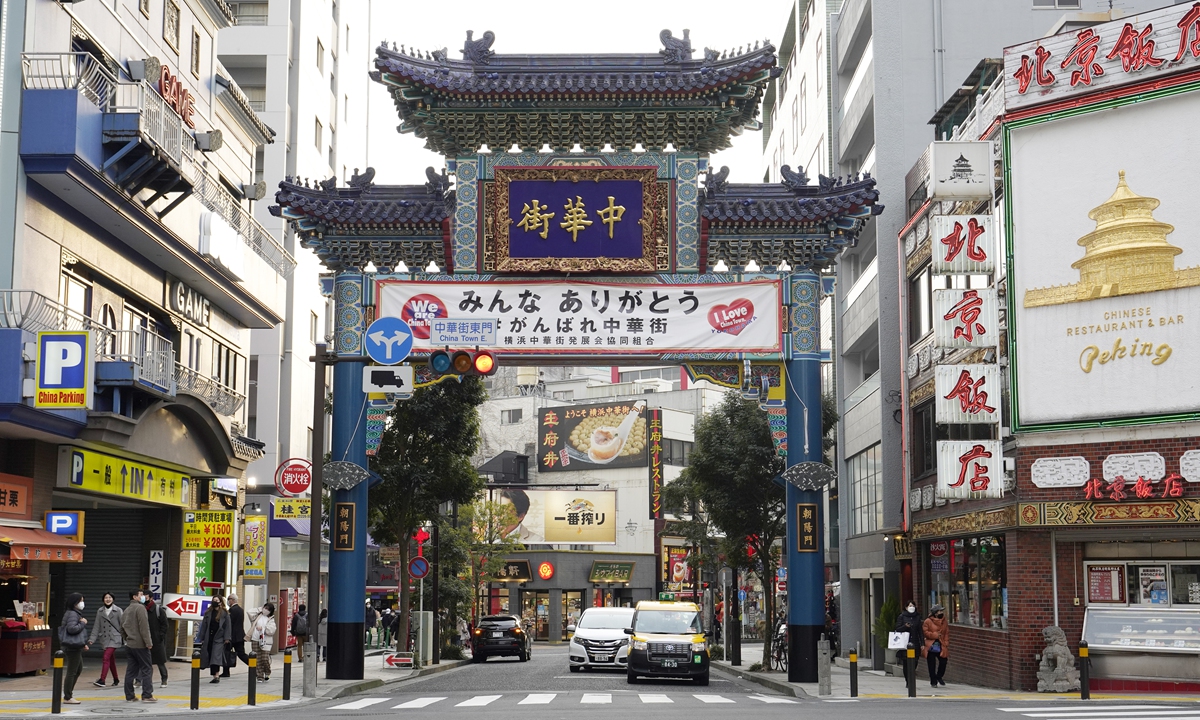 Upon the 50th anniversary of the normalization of diplomatic ties between China and Japan, Chinese Ambassador to Japan Kong Xuanyou (Kong) said that the last 50 years, although only a short fragment of the 2,000-year-long history of the two countries' interaction, is undoubtedly a period when bilateral relations developed most rapidly, bringing the most benefits to both peoples and the greatest impact on the world. Before assuming his post as the ambassador in May 2019, Kong had worked in Chinese embassy and consulates in Japan three times, the earliest one in the 1980s. Talking about the friendship and cooperation between the two countries, the ups and downs that he personally witnessed, he stressed, during an exclusive interview with the Global Times (GT), that the connotation of China-Japan relations has never been limited to bilateralism, but also been closely influenced by regional and international situation. "Along with the rapid development of bilateral ties, many problems and challenges have occurred, which are normal for neighbors. The key lies in how we can properly manage risks and handle differences, to prevent them from affecting the overall bilateral relations."

Kong: The normalization of diplomatic relations between China and Japan 50 years ago against the backdrop of the Cold War not only created a strategic opportunity for both sides to open a new chapter that learns from history and looks to the future, but also significantly improved geopolitical security in Asia, and maintained long-term peace and stability in the region. It was also important in breaking the ice of the East-West camps and promoting the multipolarization of the world.

The key to that achievement lies in the ability of both sides to break away from the shackles of the Cold War mentality, and respond to the general trend of peaceful development by making independent strategic decisions based on the fundamental interests of both countries. This reflects the fact that countries with completely different political systems, social systems and ideologies, and even those that were once hostile, can transcend differences and seek common ground, coexisting peacefully for common development. 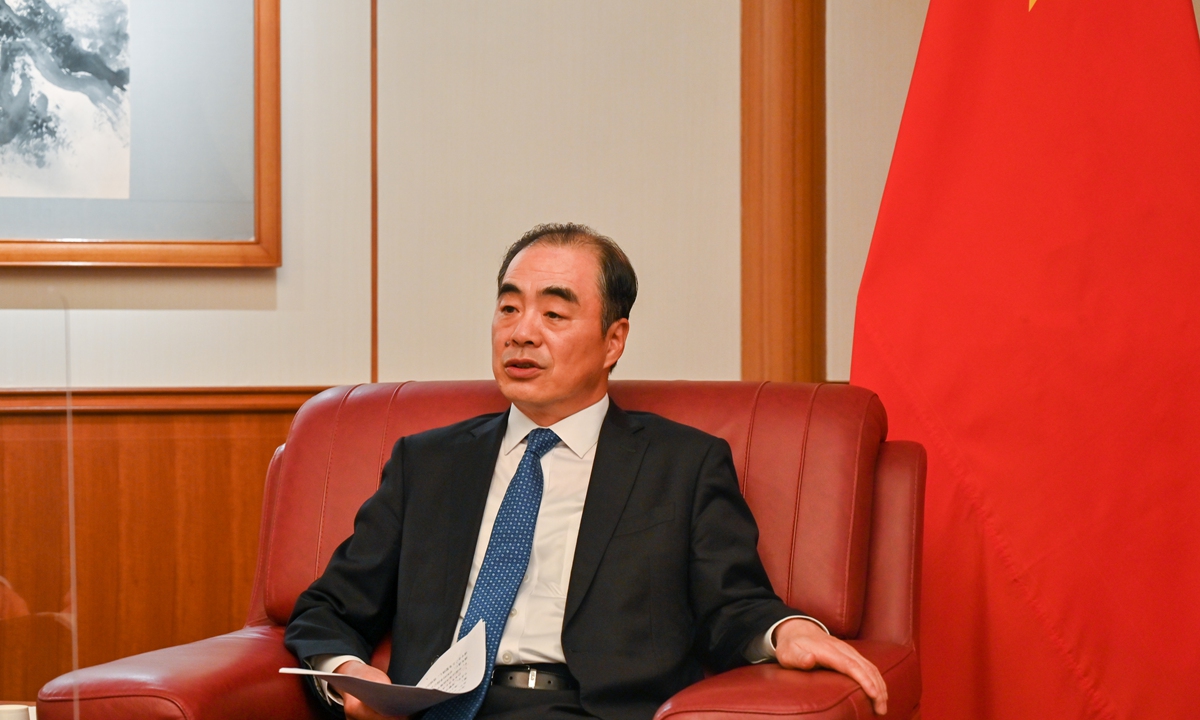 GT: What are the "changes and constants" in the handling of China-Japan relations at different times? Do you have some feelings to share?

Kong: As a long-time diplomat, I have personally experienced the ups and downs of China-Japan relations, and witnessed the growth of friendship between the two countries. Over the last 50 years, cooperation has made great strides, with bilateral trade growing from $1 billion to more than $370 billion, and people-to-people exchanges reaching an annual average of 12 million before the pandemic.

The political foundation of China-Japan relations has never changed, that is, China and Japan should always firmly believe in peace, friendship, and cooperation, and adhere to the principles and spirit of the four political documents. Only in this way can bilateral relations move forward steadily.

Meanwhile, as internal and external situations change, more complicated factors were brought to the relations. The most notable of these is the reversal of power position of China and Japan, and the consequent adjustment of Japanese society's mentality toward China.

In 2010, China's GDP surpassed Japan's and became the world's second largest economy. By the end of this year, China's GDP may be four times that of Japan. This unimaginable "China speed" has had a huge psychological impact on Japanese society, and even led some people to have a biased perception of China, which needs some time to adjust.

What I want to say the most is that no matter how internal and external environment changes, China and Japan, as immovable close neighbors, should properly handle conflicts and differences, and continue to improve political trust.

GT: For a period of time, the interaction between China and Japan has not been smooth. Friction has arisen from time to time around various issues. You emphasized that while there are inevitable contradictions, if the problems are not effectively dealt with, they will become obstacles to the development of relations. How should we understand this statement?

Kong: Specifically, the two sides should keep their word, adhere to the four political documents and a series of consensuses, and not to touch each other's red line; second, they should adhere to the positioning of the statement that "China and Japan are not threats to each other, but partners," increase trust and explain doubts to avoid misunderstandings; what's more, they should seek common ground while reserving differences so as to prevent the situation from escalating or even getting out of control.

GT: On August 17, Yang Jiechi, a member of the Political Bureau of the Communist Party of China (CPC) Central Committee, also director of the Office of the Foreign Affairs Commission of the CPC Central Committee, co-chaired the ninth China-Japan high-level political dialogue in Tianjin with Takeo Akiba, secretary general of Japan's National Security Secretariat. How do you view the recent high-level interactions between the two countries?

Kong: High-level interactions play an indispensable leading role in China-Japan relations. Meanwhile, a suitable public opinion environment is also needed. I hope that both sides will move in the same direction and make unremitting efforts in maintaining the momentum of development of relations between the two countries. 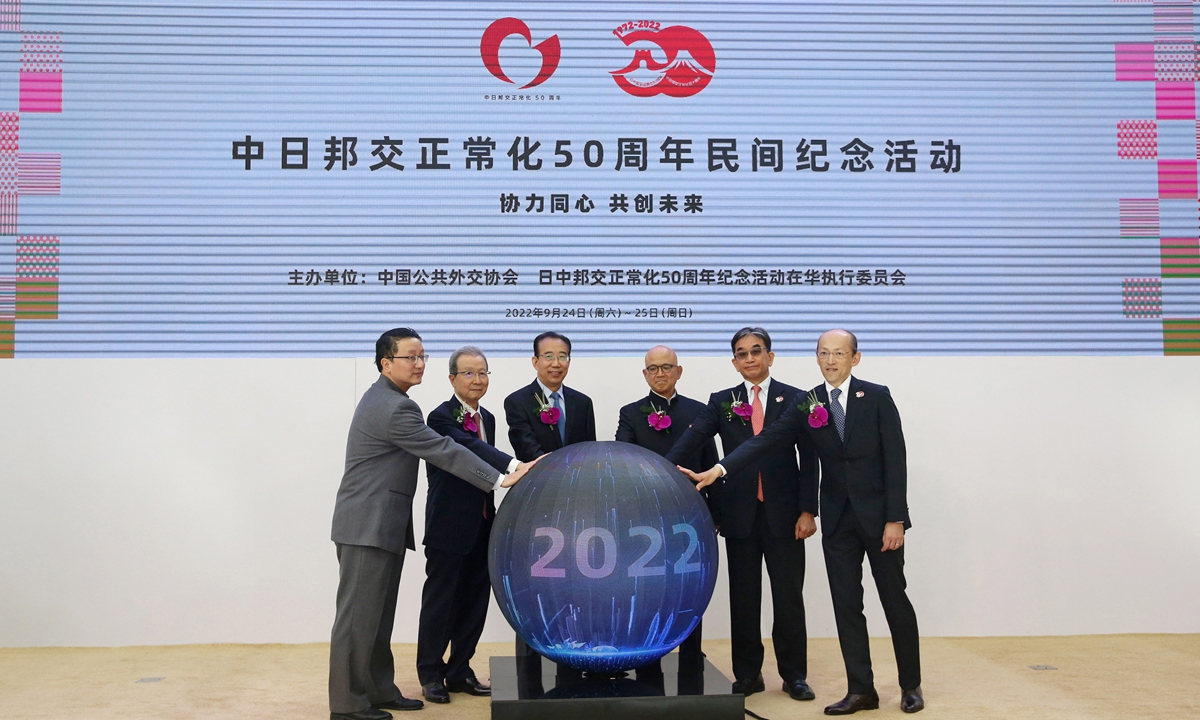 An event to commemorate the 50th anniversary of the normalization of China-Japan diplomatic ties took place on September 24, 2022 in Beijing. Photo: AFP

GT: As major Asian powers and the world's second and third largest economies, what is the role of China and Japan for regional peace and stability? What achievements have been made in promoting multilateral cooperation? In what other areas will China and Japan further deepen cooperation in the future?

Kong: Under the joint guidance of China and Japan, the Regional Comprehensive Economic Partnership (RCEP), the world's largest free trade area, has been successfully implemented, where pragmatic cooperation in East Asia has been steadily promoted.

In recent years, affected by the pandemic and other factors, bilateral exchanges have been constrained to a certain degree. However, the two countries have complementary advantages and mutual needs, and are facing a broader space for cooperation in environmental protection, healthcare, finance, science, and technology.

As beneficiaries of economic globalization, the two sides should also work together to safeguard multilateralism, free trade, and regional integration, and actively cooperate on issues such as addressing climate change, food and energy security, and environmental protection.

GT: Current China-Japan relations are facing complicated challenges. Standing at a new starting point on the 50th anniversary of the normalization of diplomatic ties, how should China and Japan face the next 50 years?

Kong: Both sides should show a sense of mission and responsibility to lead the relations into the next 50 or 100 years in a more mature and healthy posture. To achieve this, China and Japan should enhance political mutual trust and actively carry out dialogues at all levels. The two sides should also deepen cooperation, consolidate the foundation based on common interests, and inject impetus constantly.

People-to-people exchanges, especially among the youth, should be planned to prepare for the resumption of exchanges after the pandemic. Controlling conflict and practicing true multilateralism are also key to the healthy development of ties.

GT: In response to US House Speaker Nancy Pelosi's provocative visit to the island of Taiwan, the erroneous remarks made by G7 countries including Japan concerning the Taiwan question, and the acts of Japanese cabinet members visiting the Yasukuni Shrine around August 15, our embassy in Japan has made intensive efforts to elaborate on China's position. What have been the results of this series of efforts? And what challenges have been encountered?

Kong: Under our timely and effective works after some Japanese officials made negative remarks toward China, many rational voices have emerged in Japanese society. Some mainstream media published editorials expressing their disapproval of Pelosi's visit, pointing out that the move is clearly motivated by political self-interest and is not conducive to peace and stability in the Taiwan Straits. Many other scholars also said that Japan should not follow the US' footsteps on the Taiwan question.

On the other hand, there are still a great number of radical voices in Japan, clamoring that "a Taiwan emergency is an emergency for Japan," and arguing that Japan should firmly support the island. Some conservative politicians are even trying to fan flames in the situation in the Taiwan Straits, taking the opportunity to promote the process of revising the constitution and strengthening Japan's military for personal gain.

What we need to do is not only to point out its bad nature, but also to clarify the history behind the deed, and to reveal the fact that it was the US and Japan's provocation in the first place followed by our legitimate countermeasures. We also urged the Japanese government to keep its word and be careful in its actions on the issue.

GT: How would you share with the Japanese community the major country diplomacy with Chinese characteristics? What Chinese experiences are they most interested in?

Kong: During our interactions with the Japanese side, they have often expressed great interest in China's governance model, marveled by China's ability to formulate long-term development plans as well as our efficiency in concentrating the nation's efforts on these plans. The Japanese society is also interested in China's technological innovation and new business models, and admires the vibrant and dynamic development of Chinese society.

GT: How can we help Japanese people better understand and appreciate China?

Kong: As China continues to grow in size, we have taken center stage and is under the spotlight. In this process, we are inevitably subject to misunderstandings and even smearing, and legitimate acts to defend our rights may also meet criticism. In response to smears and attacks, diplomats must take the initiative to fight back and resolutely defend the core interests of the country.

In the face of irresponsible accusations and rumors, we can regard them as a necessary process of growth, and respond calmly to effectively maintain our national dignity and a credible, lovable, and respectable image of the country. Chinese diplomats in the new era should be bold in their struggle and uncompromising on major issues of principle, while also mastering communication and constantly expanding the circle of friends.

Japanese media attach great importance to reporting on China, and many realize how important China is to Japan and even to regional and international development. However, some still holds deep-rooted prejudices against China. Our task is to expand the positive side and dispel the negative ones, to let Japanese society know the real China.

In fact, our work is already paying off, as some conservative scholars are beginning to reflect and recognize the opportunities that China brings to Japan and the world. Many young people look forward to China's development, and believe that Japan should learn from China in many areas. All these reflect the positive changes in Japanese society's perception of China.