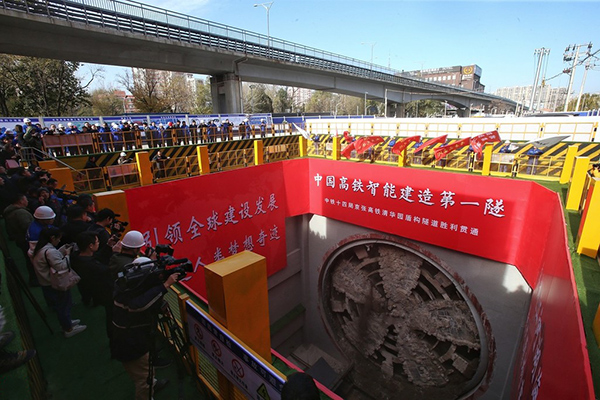 View of the construction site after the completion of the Qinghuayuan tunnel on the Beijing-Zhangjiakou intercity high-speed railway in Haidian district, Beijing, Nov 20, 2018. (Photo: IC)

The drilling of Qinghuayuan tunnel was completed on Nov 20 in Beijing, an important progress for the Beijing-Zhangjiakou intercity high-speed railway construction to move ahead smoothly.

The tunnel, which began to be built in November, is located in Haidian district, extending underground from the Beijing North Railway Station for 6,020 meters before going aboveground to the north. Its diameter reaches 12.64 meters.

The Qinghuayuan tunnel went through three subway lines, seven crucial city roads and 88 municipal pipelines. It is a shield tunnel at the city center, passing through some of the most complex underground layers and most important buildings.

Shield tunneling can minimize the destruction of current fundamental construction features such as roads, pipelines, pedestrian overpasses and bus stations, and also reduce noise pollution and the interference to people and residential communities.

On Nov 11, the drilling of nearly 13-kilometer-long tunnel on high-speed railway network for the 2022 Winter Olympics in Zhangjiakou, North China’s Hebei province, was completed. The construction of the tunnel, the longest on Beijing-Zhangjiakou high-speed railway route, began in September 2016 and was named Zhengpantai tunnel.

The Beijing-Zhangjiakou high-speed railway has a total length of 174 kilometers with 10 stops, which is the first ballast track with maximum speed of 350 km/h, able to pass through Alpine regions and sandstorm areas, according to the Beijing Railway Administration.

The project is scheduled for completion by the end of 2019 and will shorten the trip between the two cities from the current three hours to just one hour.

It is a vital transportation construction for the 2022 Winter Olympic Games co-hosted by Beijing and Zhangjiakou.