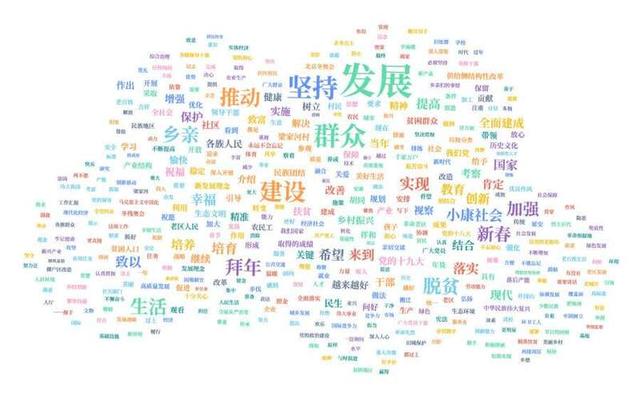 Ever since the 18th National Congress of the Communist Party of China (CPC) in 2012 and no matter how busy he is, Xi Jinping always visits the public on the eve of the Spring Festival.

We conducted a statistical analysis of reports on Xi’s Spring Festival inspections since 2013.

Analyzing these words, we may learn what most concerns Xi.

Xi has always cared about the grassroots. Ordinary workers – poor farmers, frontier guards, front-line workers, taxi drivers and delivery workers – are the people for whom President Xi consistently shows the most concern.

Xi visited a sentry post at an altitude of more than 1,000 meters on the border of Arxan city in North China’s Inner Mongolia Autonomous Region. He also went more than 20 meters underground to see a Beijing Subway construction site.

It follows that all mundane affairs relating to the masses are on his mind, such as the living conditions of poor people, salaries of farmers, the supply to food markets during festivals and housing in old urban areas.

Paying attention to the public and regarding them as the foundation of the country is the unchangeable mission of Xi’s Spring Festival inspection. It also showcases Xi’s key governing idea of “putting people first.”

Xi has said, “On the eve of the Spring Festival, the people who concern me most are the poor masses.”

In arranging his tours, Xi is reportedly willing to travel the longest distances and most tortuous roads to reach the poorest of areas to aid those in need and deliver genuine outcomes.

Within Xi’s inspections of 14 areas of dire poverty are unforgettable details.

In the home of a Sichuan Province villager Jihao Yeqiu, Xi touched his quilt to see whether it was thick enough and asked him how often his children bathed.

All these reported details showcase Xi’s meticulous solicitude for the poor masses.

In Jinggangshan, an old red revolutionary base in Jiangxi Province, Xi said, “On the road to poverty alleviation, no poor household or poor individual should be left behind.” 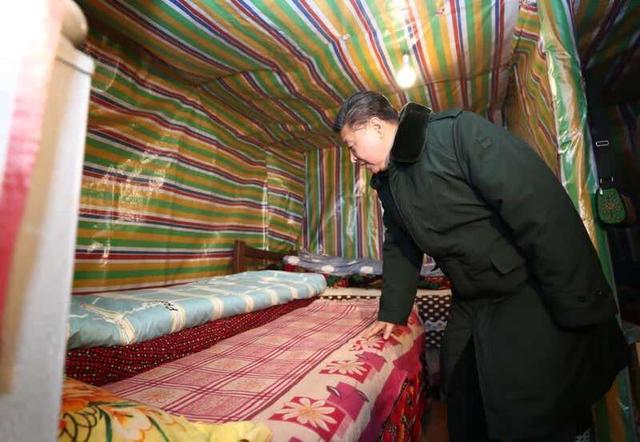 In 2020, China officially completed the task of ending extreme poverty nationwide. Nearly 100 million poor people were assisted in lifting themselves out of extreme poverty on schedule.

The choice of Guizhou Province for this year’s Spring Festival inspection was not only about checking on poverty alleviation but also witnessing the consolidation of achievements and promotion of rural revitalization.

Whenever Xi meets people during festival inspections, he makes sure to follow their traditional customs. 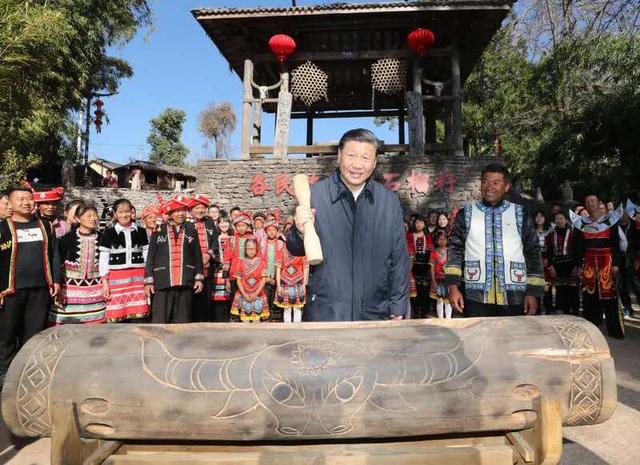 Xi beats a wooden drum three times to bless the coming year in a Wa ethnic group village in January 2020 at the city of Tengchong in Southwest China’s Yunnan Province. (Photo: Xinhua)

Xi’s blessings respect different cultures. He has said, “Chinese civilization is deeply rooted in the fertile land of various minority nationalities which live in harmony without uniformity” and that “we should focus on the protection and inheritance of ethnic minority groups’ cultures.”

Families traditionally plan for a new life at the beginning of the lunar new year. During inspections, Xi also looks ahead to the coming year.

Fulfilling the CPC pledge to empower people’s aspirations for a better life hinges on successful development.

Xi's nine Spring Festival inspections have all focused on development with his “ecological civilization” concept outstanding.

In 2013, at a construction site for the Taohe River water supply project, Xi asked workers to follow the rule that “livelihood should be put in the first place and governing the river is important.”

In 2016, Xi visited Jiangxi Province and proposed “we should do a good job in governing mountains and rivers.”

In 2021, Xi underlined in Guizhou Province that “we should stick to the two lines of development and ecology, creating a new way of ecological conservation and green development.”

According to an old Chinese saying, “the whole year's work depends on a good start in spring.”

In 2015, visiting the Xi’an Institute of Optics and Precision Mechanics of the Chinese Academy of Sciences, Xi said that scientific and technological personnel should establish a strong sense of responsibility and confident innovation.

In 2018, Xi visited Sichuan Province and proposed “we should improve enterprises’ ability of independent innovation and international competitiveness so as to transform ‘Made in China’ to ‘Created in China.’”

Xi has said, “I firmly believe that Chinese people’s lives will be better and better year by year.”

It is said his expectation is the common desire of all Chinese people.