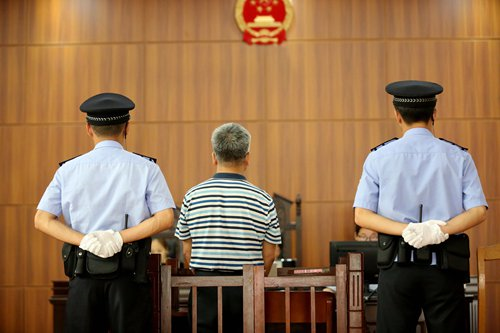 Some corrupt officials in China have become inviting targets for kidnappers, as several recent cases show.

After the ransom is paid, these officials often find themselves in trouble with prosecutors, who detect signs of corruption during the investigation.

Zhou Fang, ex-head of the Laibin People's Hospital in South China's Guangxi Zhuang Autonomous Region, managed to survive a kidnapping last year. But he found himself under mandatory arrest by local investigators this August.

In February 2017, a gang of kidnappers led by a then Laibin Health and Family Planning Commission official surnamed Wei knew about Zhou's wealth through corruption and targeted him.

Wei and his two other accomplices waited outside Zhou's house in a rental car on February 15, carrying handcuffs, ropes and chains. When they spotted him the next day, they snuck up on Zhou from behind, forced him into a bag and put him into the rental car.

The gang took Zhou to a cave and stole 1,900 yuan ($278) Zhou carried in cash. They hung him in the air by his arms and whipped him, forcing him to confess who he had received bribes from.

The physical torment caused Zhou injuries all over his body, and damaged a ligament in his right knee.

Zhou called up his colleagues to lend him 100,000 yuan to pay the kidnappers off.

Wei and his fellow gangsters spilt the ransom before they released Zhou into the countryside.

In December 2017, the gang was arrested by local police and the court sentenced the three to 12 years in prison and a fine of 40,000 yuan each for their criminal acts.

According to the website of the Laibin Commission of Discipline Investigation (CDI), the Laibin CDI on August 3 this year made the decision to remove Zhou from his public position, and handed Zhou's case to local investigators.

The investigation found that Zhou, while working as deputy director and then director of the hospital, violated Party discipline by accepting bribes, having improper sexual relationships with numerous females, taking advantage of his position and seeking benefits for others.

The local prosecutor charged Zhou with committing the crimes of bribery and having a large income from unclear sources, said the website.

Zhou's experience is not unique.

Liu Rongling, another hospital head, was kidnapped in 2013 in Zhoukouxiang of Central China's Henan Province, before the local CDI found out about his corruption in 2015.

Liu was abducted near his home by three people on June 8, 2013, and his wife was asked to pay a 3 million yuan ransom for his release before she reported the crime to the police.

The kidnapping suspects were soon arrested and confessed that they owed a huge gambling debt and decided to target a wealthy corrupt official. Liu was rescued by the police.

Liu was later investigated by the Zhoukouxiang CDI. According to the local court, Liu received 2 million yuan annually in illegal income for three years. The court sentenced Liu to 13 years behind bars on July 17, 2015, for his misconduct.

The seemingly unrelated events of being kidnapped and being investigated for corruption  are in fact inevitably connected, Zhuang Deshui, deputy director at Peking University's Research Center for Government Integrity-Building, told the Global Times.

Kidnappers don't bother with innocent officials, he said. All or most abducted officials must have earned their bad reputation among the public due to their corruption problems, inviting criminals to go after their illegal income, Wang said.

A total of 58 officials at the provincial and ministerial level or higher were punished for discipline violations in 2017, according to the Communist Party of China Central Commission for Discipline Inspection (CCDI) in January.

Party discipline inspection agencies nationwide handed out punishments to a total of 527,000 people in 2017, ranging from warnings and demotion to expulsion from the Party and removal from office.

About 48,000 officials were investigated or prosecuted for serious violations of discipline and suspected criminal activity, the CCDI said.