○ Programming classes are becoming more popular in China as an extracurricular activity, especially among middle-class families
○ The Chinese government has encouraged sci-tech education in schools, adding concepts such as AI and algorithm into high school curriculum 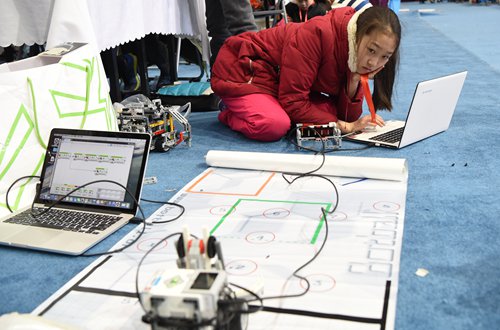 A female student adjusts the robot designed and programmed herself at RoboRAVE Asia in Beijing this February. (Photo: VCG)

On a weekday after school, a few children gather at the Blue Light SciTech Club in Shenzhen, South China's Guangdong Province. In the computer lab, a teacher and four elementary-school children hovered over a computer screen, pointing at colorful blocks and moving them around.
The children are learning programming. In recent years, such after-school activities have become more common among China's growing number of middle class. These parents have high hopes for their children and also have growing purchasing power to provide their children the best educational resources.
The Chinese government has also started placing more emphasis on programming education, with continuous policies. In 2017, the State Council declared that there should be a gradual promotion of programming classes in schools. In 2018, the Education Bureau announced to officially add concepts such as AI, Internet of Things and algorithm into high school curriculum, which will be implemented starting this autumn.
Raising problem-solving awareness
China is experiencing programming fever, according to multiple reports. In recent years, Chinese parents have been signing their children up for all sorts of extracurricular classes, with most focusing on programming, in the hopes that their children will not "fall behind at the starting line."
The Blue Light SciTech Club is one of the many in China to seize this growing market and cater to the increasing demand. Founded by Sina Glamocic in Shenzhen in 2014, the goal of the company is providing an education and an appropriate environment for children to develop skills in science and technology. The founders' aim is for young people to not only be consumers of technology, but also designers and makers who will use the tech to deliver meaningful projects.
Glamocic said their goal is not teaching a child how to use a coding tool, such as Scratch, a popular tool for children developed by the Massachusetts Institution of Technology (MIT) where coding language is replaced with colorful blocks with pre-loaded commands; all children have to do is drag and drop these blocks onto a page according to logic.
"For kids, the hardest part is to understand how to use computers to solve problems, that's where we spend a lot of time. It's easy to teach them to use Scratch or other tools, but that's not the point. The point is to teach them how to use this knowledge to solve problems or make something useful," Glamocic told the Global Times.
For example, a child in the club created an app using coding software to tell those who are home alone what to do if they get into an accident. Another created an app used for simulated dissection in science class, so they would not have to use a real animal. In the app, one can dissect a digital animal and see its internal parts, pressing each organ for an explanation.
Blue Light has been using products from a Shenzhen-based startup company, Makeblock, for their classroom activities, and they recently started using the newly released Makeblock Neuron Creative Lab Kit.
The kit includes blocks that have different functions, such as a camera lens, a spiral level, Bluetooth, speakerphone, color sensor and voice recognition. All blocks can be connected magnetically, being assembled to build structures, then using a software based on Scratch for control.
When visiting the Makeblock lab, the Global Times reporter found products created by staff using these products. For example, a gramophone is created by using a block that has a color censor and a block that has a speakerphone; in the coding software, it was designed that when a certain color is tapped, a certain musical note is sounded.
Glamocic found the kit user-friendly for younger students, as it helps encourage students to express themselves through creativity and art. Since using the kit, projects that students have made include different kinds of vehicles, home controlled devices, farm feeding systems and plant watering systems.
Makeblock also initiated the MakeX robot challenge in 2017, holding contests across China to spread the robot culture. 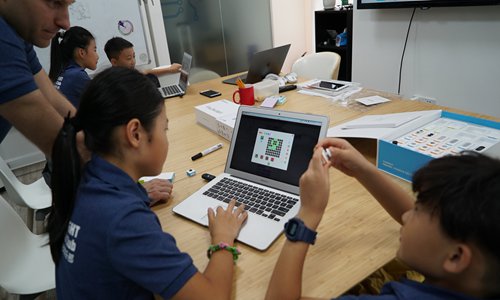 Favored by middle class
In recent years, Chinese parents started placing more emphasis on STEAM (science, technology, engineering, arts and mathematics) education. The concept was developed by the US government and put into use in American schools, and has also gained popularity in China, developing rapidly.
According to a report by Soochow Securities in 2017, the education market for STEAM in China is worth 9.6 billion yuan ($1.47 billion) and has a potential market of 52 billion yuan.
Yu Yinan, an investor of the Blue Light club, told the Global Times that even though the market is growing and there are many programs that offer STEAM education, many do not teach satisfactory classes, which is why she invested in Blue Light.
"I'm determined to send my children to MIT," she said frankly.
Yu has worked in cloud computing for years. Her children have visited her at work ever since they were young. When they expressed the desire to learn STEAM, especially programming, she signed them up at Blue Light.
"There are many programs that basically just teach you how to use a type of software product, such as Lego, it's like buying a toy, and once deprived of that platform, the children still don't know what to do," she said.
Because of her expertise, she understands the market better. At Blue Light, the teachers decide on a concept to teach the children first, such as "loop," then they find a product, a robot or a software that can demonstrate the concept, and use it to teach children.
Furthermore, the expanding Chinese middle class, who boasts increasing purchasing power, is pushing for better-quality education. Differing from the old days, these parents are not just pushing for better grades or awards in competitions, but rather advanced teaching methods that can help their children grow and expand their horizons.
A 2017 article by the People's Daily evaluated the market for programming education after the State Council released a document encouraging such education be incorporated in China's schools. Parents are sending children as young as kindergarteners to learn coding.
There were also skeptical voices, questioning how much children that young can truly learn.
Ma Ru, a stay-at-home mom married to a realtor, is representative of those who send their children to Blue Light. She told the Global Times her 10-year-old daughter has been coming to Blue Light for the past three years. She was introduced to the holiday camps held by the club, drawn into their science lessons, then turned to programming.
"I think this is a future trend," she said. "We think of this as sort of extracurricular classes, and we hope she can learn more knowledge. She has expressed an interest (in tech)."
Yu confirmed that 90 percent of the children in the club attend international schools, and many are from well-to-do families. In fact, Blue Light interviews all parents before accepting their children, making sure the parents have the same values and will be on the same page as instructors, to avoid future trouble.
Neither Ma nor her husband knows a thing about programming. However, she praises the club for setting an agenda that keeps the children interested as well as opens their minds. In May, she accompanied her daughter to the US to participate in the RoboCom, a robotic contest. She saw with her own eyes how her daughter handled stress and pressure and developed strategies.
Ma said teachers at the club provide a good platform for her child and they place an emphasis on advanced concepts. For example, one of the instructors introduced "girls coding," which is a popular movement in Western countries trying to break stereotypes and involve more girls in programming. She said such teaching method satisfies the parents more, since the parents are already at certain levels.
"Shenzhen is a highly technical city and the parents here are in touch with advanced platforms, so they start high and expect more," she said.