CHINA Kim thanks China for contribution to Korean Peninsula issue

Kim thanks China for contribution to Korean Peninsula issue 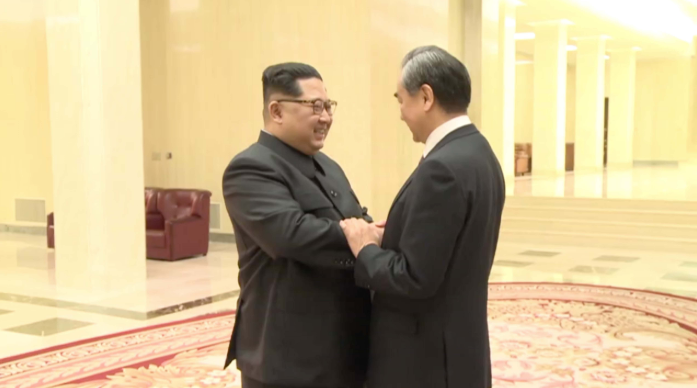 Kim Jong Un, the leader of the Democratic People's Republic of Korea (DPRK), on Thursday thanked China for its contribution to the Korean Peninsula issue during a meeting with Chinese State Councilor and Foreign Minister Wang Yi in Pyongyang.

For his part, Wang congratulated Kim on the "successful" recent inter-Korean summit and the  "epochal" Panmunjom Declaration that was issued following the meeting between Kim and Republic of Korea leader Moon Jae-in.

He added that the summit has provided a beneficial opportunity for a political solution to the Korean Peninsula issue.

Wang conveyed Chinese President Xi Jinping's cordial greetings to Kim and said Kim's visit to China in March and the historic meeting with Xi has opened a new chapter of Sino-DPRK relations.

He praised the DPRK's role in making resolute decisions that had led to positive changes on the peninsula.

The foreign minister said China supports the decision to officially declare the Korean War over with the planned transition of the armistice agreement to a peace treaty, as well as the strategic focus of the DPRK to economic construction and on resolving its legitimate security concerns in the process of promoting denuclearization.

China is willing to maintain communication and strengthen coordination with the DPRK, Wang added.

Kim also asked Wang to convey his cordial greetings to the Chinese President and said his meeting with Xi had achieved significant consensus and fruitful results.

The friendship between China and the DPRK is a valuable legacy and consolidating and developing bilateral cooperation between the two nations is the unswerving strategic policy for the DPRK, he added.

The DPRK is willing to work with China to push friendly relations towards a new stage, Kim said.

He said the DPRK's side highly appreciated China's positive contribution to peace and stability on the Korean Peninsula and the DPRK is willing to enhance strategic communication with China.

Kim said the DPRK firmly stands for denuclearization of the Korean Peninsula and the recent positive changes are significant and conducive to a peaceful settlement.

The DPRK is willing to establish mutual trust through resuming dialogue and exploring the root cause of the threat to peace on the peninsula, Kim added.

Wang is in the DPRK from Wednesday to Thursday at the invitation of the DPRK's Foreign Minister Ri Yong Ho.

In talks with Ri on Wednesday, Wang said that China fully backs the DPRK's efforts to achieve denuclearization on the peninsula.