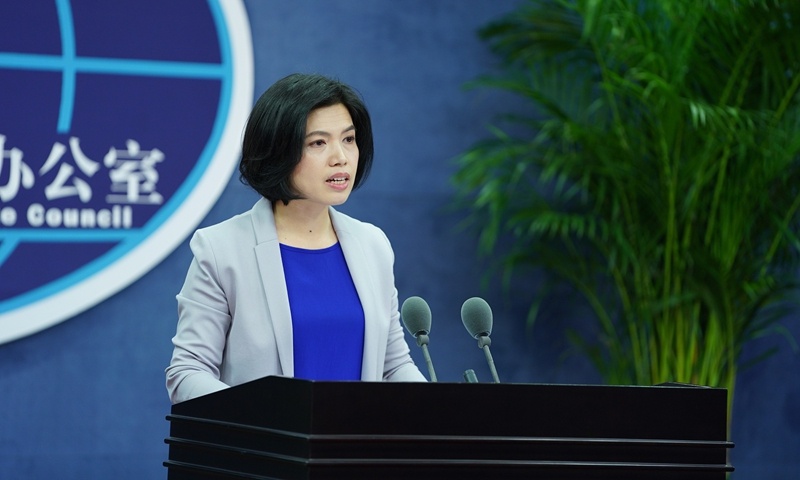 Regardless of its intentions, the Kuomintang (KMT)'s latest proposals against the Communist Party of China (CPC), and promoting the Taiwan island's relationship with the US, will not only tarnish KMT, but also severely harm cross-Straits relations, observers said.

Taiwan's "Legislative Yuan" on Tuesday passed two proposals from the KMT, which are to "request the US to help confront the CPC," and "for the Taiwan Island and the US to resume diplomatic ties," Taiwan local media reported. The KMT also called on the ruling Democratic Progressive Party (DPP) to "work actively" on these two issues.

Zhu Fenglian, a spokesperson for the Taiwan Affairs Office of the State Council, responded on Tuesday by saying that Taiwan is an inalienable part of China, and both sides of the Taiwan Strait belonging to the same China is an unalterable historical and legal fact.

The root cause of the current complex and severe tensions in the Taiwan Straits is that the DPP authorities have colluded with external forces and continuously adopted provocative actions of "Taiwan independence."

We firmly oppose any separatist actions that create the so-called "Taiwan independence," "two Chinas," or "one China, one Taiwan," she said.

"These proposals show that the KMT has alienated from its previous stance - it has no method, no thought, no framework and no direction on dealing relationships between the Chinese mainland, Taiwan island and the US government," Chang Ya-chung, a professor at the National Taiwan University and a member of the pro-reunification Kuomintang (KMT), told the Global Times on Tuesday.

Chang said the KMT central committee might want to "mock the DPP administration" with the proposals, or, to earn some favor from local Taiwan people. "But its proposals not only anger the mainland, but also diminish the KMT."

Though the proposals seem to have no practical significance, they will ease up the US' hand to play the "Taiwan cards," further making Taipei "tag-along" with Washington, Chang said.

"The cross-Straits relationship used to be the advantage of the KMT… The right way for the KMT should be to help resolve the current state of hostility between the mainland and the island, recognize and deepen the 1992 Consensus, and realize peaceful cross-Straits development," Chang noted. The KMT, in its proposals, urged the ruling DPP in Taiwan to persuade Washington to consider the Chinese mainland as a "threat". It even suggested DPP set a goal to resume so-called "diplomatic ties with the US". The proposals were passed at the "Legislative Yuan" and sent to related departments to study, local media reported.

Zhang Wensheng, a deputy dean of the Taiwan Research Institute at Xiamen University, said that the KMT proposals were made to distance itself from the Chinese mainland, and also, to play up its image of "loving Taiwan and protecting Taiwan" so as to compete with the DPP.

"However, the two proposals are of a 'Taiwan independence' nature and must be strongly condemned," Zhang noted.

Whether it is the "resumption of 'diplomatic relations'", or the US' military defense of Taiwan, it is nothing to do with Taiwan, but ultimately a decision by Washington, Zhang noted. Also, it is wishful thinking in the island of Taiwan.

In fact, the ruling DPP had previously hyped the "resumption of diplomatic relations" as well. On February 13 this year, Taiwan's "Legislative Yuan" leader Yu Shyi-kun met with William Christensen, Director of the Taipei Office of the American Institute in Taiwan, and suggested the "resumption of diplomatic relations." Christensen did not respond.

Lai Ching-te, former head of Taiwan's executive branch, in October 2018 said that the proposal of "establishing diplomatic relations with the US" was good and would be communicated to the US. At that time, Ma Xiaoguang, a spokesperson for the Taiwan Affairs Office of the State Council, responded:  "Listening to those words, I feel that someone there is day dreaming."