Chinese researchers have found that the knife fish in the Yangtze River, once a sought-after delicacy and a species plagued by overfishing, is recovering thanks to a fishing ban. 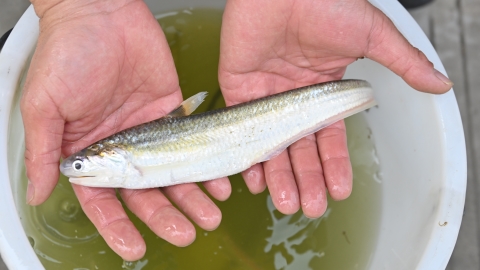 Monitoring data from different sections of the Yangtze and sea area adjacent to the river's estuary show that knife fish resources have been continuously recovering since 2019 when measures were taken to protect the fish, said Yang Jian, researcher with the Freshwater Fisheries Research Center of the Chinese Academy of Fishery Sciences.

The knife fish was known as "the first delicacy in the Yangtze," and its population saw a sharp decrease due to overfishing and degradation of its natural habitat. China banned the productive fishing of this species in 2019 and a 10-year fishing ban took effect in pivotal waters of the Yangtze in 2021.

Since 2014, Yang Jian and his colleagues have been monitoring a part of the Yangtze-connected Poyang Lake, an area for the knife fish to lay eggs. Yang said that from 2019 to 2021, the average number of knife fish caught by every observation unit in the area is 67 times that recorded during the period from 2014 to 2018.

Liu Kai, a researcher with the center, has led a team in monitoring the Yangtze estuary. Liu said the daily average number and weight of knife fish collected in 2021 was 2.09 times and 2.48 times more, respectively, than that produced by collection efforts in the area from 2019 to 2020.

Yang Jian added that areas inhabited by knife fish have been increasing along the Yangtze, and the species was recently found in places such as Dongting Lake and the Ganjiang River where there had been no trace of the fish for more than a decade.