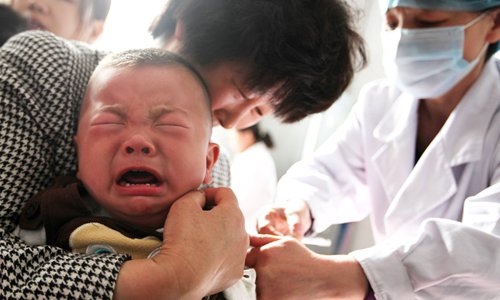 A child gets a vaccine dose in Huaibei, East China's Anhui Province on July 26. (Photo: IC)

As a rabies vaccine scare rocked China, experts said weak innovation has undermined its vaccine industry, even as the growth potential for the sector is huge.Like many others, 30-something Zhang is troubled these days. Zhang, a Beijing resident, is not sure whether his son should still get a vaccine dose, especially the non-mandated ones, following widespread news coverage about fake vaccines and related discussion within the online community.Some of Zhang's worries are well-grounded, as experts have said, in the wake of a fake vaccine scandal that caused public outrage in July, that the Chinese vaccine industry is suffering from a lack of R&D, among other setbacks.On the other hand, the industry is also facing opportunities as non-mandatory vaccine consumption gains traction.Much media attention was snared by a number of vaccine safety cases in China in July. A-share-listed leading vaccine producer Changsheng Bio-technology Co's fabrication of rabies vaccine production data and the sales of substandard vaccines for babies have led to the arrests of 18 people, sending the company's share price down by two-thirds within half a month. Meanwhile, the Wuhan Institute of Biological Products Co's manufacturing of substandard vaccines was trialed by a nationwide vaccine safety crackdown.These incidents have raised concerns over the impact on China's vaccine industry, which consists of about 30 domestic and foreign players. Four such companies are listed firms on the A-share market.Industry at a glanceChina is one of the world's largest vaccine-producing countries, and its number of vaccine makers is also the world's largest, according to the prospectus of Shenzhen Kangtai Biological Products Co issued in December 2016. Kangtai is the youngest among China's four listed vaccine makers.In the prospectus, the company said the global vaccine industry's annual growth rate is expected to be 11.8 percent and China's vaccine industry still contributes a small portion of total revenue of the overall domestic drug-making industry, thus having great potential for growth. The industry could bank on the fast growth of non-mandatory vaccines, those not listed in the State-funded immunization program and those that are paid for by consumers on a voluntary basis.  Li Tianquan, co-founder of domestic healthcare big data platform yaozh.com, said that the Chinese vaccine market is sizeable, accounting for about 10 percent of the global market, largely due to the size of the Chinese population. On the other hand, the domestic vaccine industry is still underdeveloped."The products used in the Chinese market are predominantly ordinary products, which put the profit margins at a lower level compared with foreign drug makers," Li told the Global Times on Sunday.According to global rating agency Fitch, which will continue to set most Chinese drug makers' business profiles to non-investment grade levels, Chinese drug makers tend to have high product concentration in low-quality generic drugs due to their under-investment in R&D and tend to focus on selling and distribution, including managing their relationships with public hospitals, the dominant drug consumption channel in China.This is coupled with the sector's weak regulatory supervision as a result of the China Food and Drug Administration's (CFDA) staff shortage and light penalties, Fitch said in an email statement sent to the Global Times.An executive at a Chinese pharmaceutical firm, speaking on condition of anonymity, told the Global Times that the pursuit for profit along with poor quality management could lead to the making of substandard drugs."The innovation capability of the domestic vaccine industry lags far behind their Western counterparts and such a weakness has resulted in thinner profit margins and caused some firms to rack their brains to reduce costs, sometimes causing incidents," Li said. The global annual sales revenues of one vaccine developed by world-leading pharmaceutical firm Pfizer is double the total sum of all domestic drug makers' vaccine sales revenue, according to Li.Weak innovation is coupled with high production concentration. "Unlike their international peers, Chinese drug makers are often dependent on several key products to generate a large portion of their revenues and earnings, which leaves them vulnerable to potential drug safety incidents," Fitch said in the statement.Progress recordedHowever, Li said that while there is basically no reference-listed vaccine drug in China, the country has still made significant progress in utilizing generic vaccines.In a July 25 statement, in which the WHO expressed its concerns over China's rabies vaccine scandal, the UN agency stated that since the Expanded Program on Immunization in China was launched, it has made China free from polio and significantly reduced vaccine-preventable diseases such as measles, mumps, rubella and hepatitis A and B among children. The Expanded Program on Immunization is a WHO program initiated in 1974 with the goal to make vaccines available to all children. According to the Chinese Center for Disease Control and Prevention, China has successfully contained the ratio of children infected by hepatitis B to under 1 percent thanks to its vaccines, potentially preventing up to 500,000 newborn babies from getting the disease."China's vaccine industry primarily covered the needs of the national immunization program, with its product quality basically ensured. But new vaccines, new technologies and innovations are lagging behind world-leading powers," Li said.Exports under influenceOn August 1, India's regulators ordered an immediate recall of rabies vaccines made by Changchun Changsheng, AFP reported, on fears that the substandard vaccines may have been imported not only to India, but to Cambodia and Egypt as well.The WHO's China office said it did not have information on which countries may have imported the vaccine but the CFDA said the company has began recalling its products sold overseas, and the CFDA will monitor the recall process.The exports of vaccines have become another mirror for Chinese vaccine makers' weak internationalization capacity, experts said. So far, there are only two Chinese vaccines that hold WHO prequalification, a major threshold to export vaccines. India, in contrast, has 44 vaccines passing WHO requirements.